By Randy Kugler
I made no request of the Tillamook County Elections Clerk to investigate the registration of any Manzanita voter, made no claim to the Elections Clerk that any voter may have engaged in voter fraud and made no request to challenge the outcome of the Manzanita City Council election.
These reckless allegations by the signers of the recent letter mailed to Manzanita citizens (see letter below) underscores their commitment to not be constrained by the truth if it is convenient to their message.

I was aware that part time residents were being asked to change their registrations to vote for the incumbents during the months leading to the election. I encouraged anyone who asked me that if they had concerns, that State law provided the opportunity for the Elections Clerk to investigate and that they could initiate an inquiry. I told folks that I would answer their questions and help as needed if they wanted me to do something.

When the rights of citizens to make lawful inquiries about how their government operates are twisted in the manner of the signers of this letter into accusations of criminal behavior on the part of said concerned citizens, we have reached a dangerous situation.

The Elections Clerk has apparently finished with her investigation. That investigation for example, concluded that on June 23, 2020 the owner of this unfinished and unoccupied home on the corner of Division and North Ave. as one of the “targeted people with strong ties to Manzanita” changed their registration to say that this was their residence. 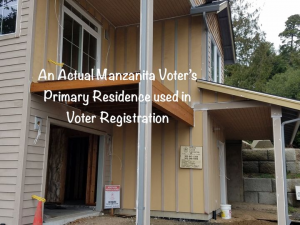 Others found to be in apparent compliance included registered short term rental owners including one who successfully changed their registration on the day of the election and another whose home address is listed on the County tax records in Seattle Washington.

The citizens who made this inquiry were in no way disputing the fact that a citizen owning two homes has the right to choose which of those homes they consider their primary residence for voting purposes.

The Elections Clerk in settling any questionable claims of residency is provided 6 criteria to review to come to a decision. This was all these citizens asked the Elections Clerk to do. To level slanderous accusations against citizens requesting that an elected official perform an inquiry allowed under State law should be of concern for residents who received this letter.

ORS 247.035 (3) An elections official may consider, but is not limited to considering, the following factors in determining residency of a person for voter registration purposes:

(c)Where the person registers motor vehicles for personal use;

(d)Where any immediate family members of the person reside;

(e)The address from which the person pays for utility services; and

(f)The address from which the person files any federal or state income tax returns.

From the copy of the letter that was sent to the Elections Clerk which examined available public records, it appears that:

Personal mail such as property tax statements for all the addresses in question are being sent to non Manzanita addresses.

Except for three addresses, utility bills for electric and sewer services are being sent to non Manzanita addresses for payment.

There may be at most 4 addresses where a claim that an immediate family member also resides can be confirmed. 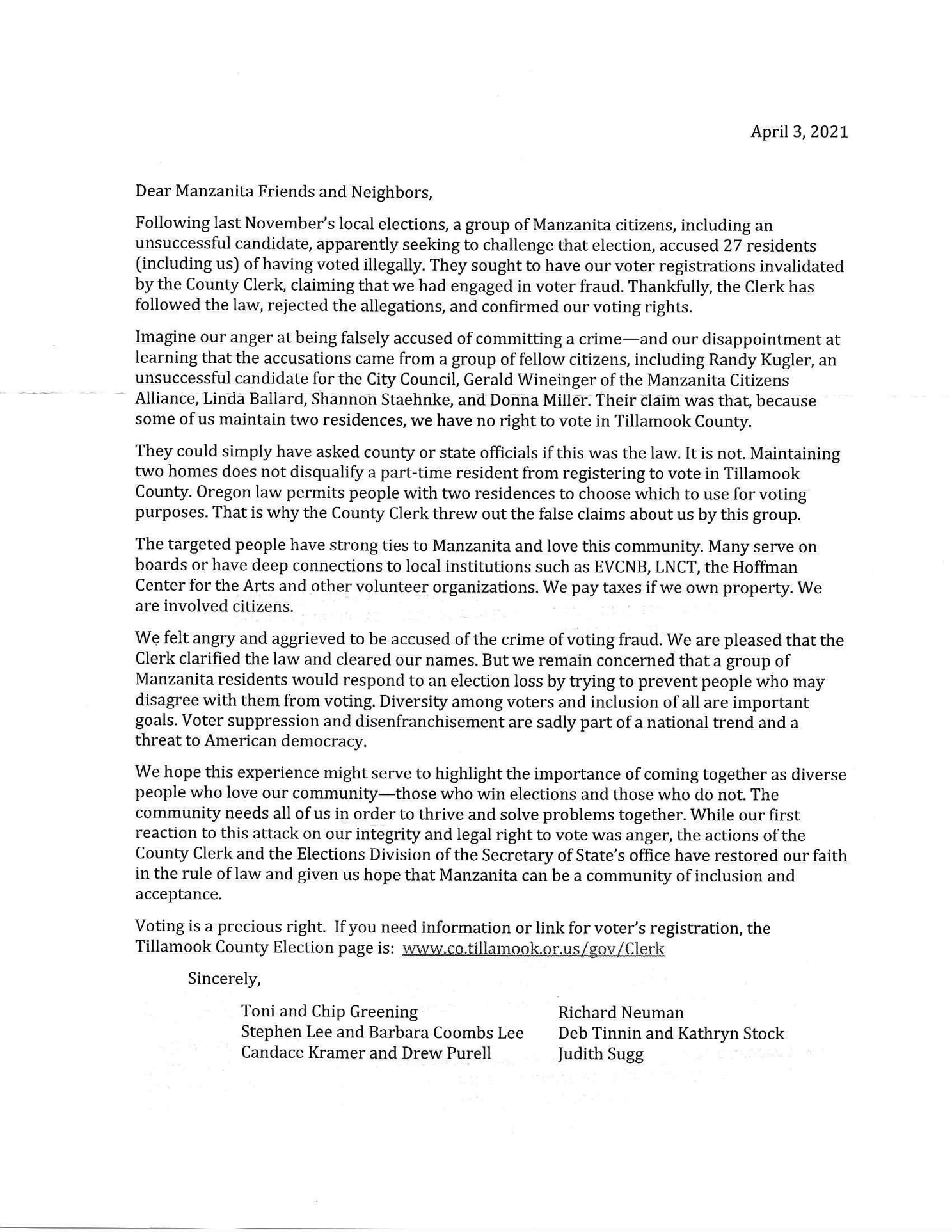