By Laura Swanson, Editor, Tillamook County Pioneer
At 94-years-young, (Gerald) Pat Patterson arrived in Tillamook County as a Coast Guardsman in 1943 at the brand new Garibaldi station during World War II. During his three-and-a-half years of service, he rode horse patrol on the beaches (his first horse was “Garibaldi”),


rescued several people, and was the last of the Coast Guard Reserve lighthouse keepers at Cape Meares.

He has a few stories to tell … such as the mysterious sinking of a sub off Cape Meares. Over 50 years later, government officials interviewed Pat about that night in 1944. “I was on radio duty from midnight to 4 a.m.,” explained Patterson. “There are two radios, regular communications and an emergency radio, that never came on, accept that one night, when it crackled to life with a counting ‘1-2-3-4 drop’ and then for two hours I heard the bomb concussions.” It wasn’t until that interview 50 years later that confirmed that a full-size Japanese submarine was sunk off Cape Meares on the fateful night in 1944.

“When I arrived in Garibaldi at 19, I knew that I was in the most gorgeous spot in North America,” said Patterson. “I’ve had a great, great, great life and even then I knew that I was the luckiest guy.” Born Gerald King Patterson in Graybull, Wyoming, raised on Cottonwood Creek near the Big Horn River, all the menfolk in the family bear the nickname “Pat”. “It gets real confusing at family reunions,” said Patterson. “Then the wives all call us by are given names,” he chuckled. “I’ve taken my mother’s advice to heart – Treat others as you want to be treated, so I’ve always treated everyone as if they are my dearest friends, and so I’ve made lots of friends,” he continued.
Pat fell in love with a girl in Garibaldi while serving in the Coast Guard, and her family owned Edmonds Seafood Company. For 30 years, Pat worked at Edmonds, “49 hours a day, three months without a day off – that should have told me something about that life,” explained Pat. “One night we processed 10 ton of crab, moving two and half ton of salmon.” Patterson served as a Port Commissioner when the port was located in Bay City, and began his years of community service through the Garibaldi Lions.
Pat is one of the founders of the Garibaldi Lions’ Lumbermens and Railroaders Park at the southern entrance to the Port of Garibaldi. Over the years, he was instrumental in acquiring equipment to display and bring #90 to Garibaldi. “Bill Fouste and I went up to Washington to pick up a load of logs, and there was #90, well, I fell in love with the old girl. We came home with the logs and the engine,” said Patterson. The Lions Club is working to preserve the famous #90 engine as well the 1913 passenger car and caboose. Working with the Oregon Coast Scenic Railroad and other railroad enthusiasts, plans are to seal the roofs of the equipment and a general “sprucing up” of the park is also in process. 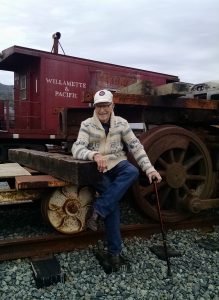 “I want to see this park restored to its glory days,” said Patterson. “Since I’m 94, that’s why I’m calling it my last hurrah. I’ve seen so many things in all my years, so many changes, and this park is near and dear to me. I could tell you the stories about each building, piece of equipment, and more.” And even about the trees planted there as well. Audio recordings of Pat’s stories that could be accessed while visiting the park are being developed, so everyone can hear from the man himself about the park and equipment. Though he’s referring to this as his “last hurrah”, Pat continues to be involved with many community projects – so it’s doubtful that this is his “last” hurrah. Pat’s passion for the Park, the trains and all things historic is a call for “all aboard for action” to make this a tribute to the hardworking lumbermen and railroaders that were instrumental in the early days of Tillamook County.
A suggestion that Pat could write a book about his stories, brought this answer, “Well, if I’d had some wild women in my past it might be a best-seller,” he said with a laugh, “But no wild women, just lots of really great people, good friends and good times.”


The Garibaldi Lions Club is undertaking the project with other community partners, and the Port of Garibaldi to update the buildings, improve signage at the lumbermen’s equipment museum and protect the historic #90 engine, passenger car, caboose, and other equipment. Donations would be greatly appreciated to help with the projects, and plans for the future restoration of the engine and rail cars. “We look forward to the day when we can allow public access to #90, the passenger car and caboose,” said Lions Club members. “We can all show Pat that we’ve got this and will proudly restore and maintain this park that he’s dedicated his life to.”
To donate to the Garibaldi Lions Club Lumbermens and Railroaders Park, send donations to Garibaldi Lions Club, PO Box 597, Garibaldi, OR 97118, designating donation to the Park.
For more information about the projects, contact Lions Club members, Aaron Inman at 541-908-3627 Aaron Inman or Becky Bridge at 503-801-3331 or email to Karna Inman at karnasmoon@yahoo.com.