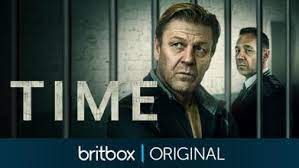 EDITOR’S NOTE:  The pandemic has spotlighted some of the areas that need the most attention in our community – particularly the plight of the houseless, and that many of those on the street also suffer with mental health and substance abuse issues.  And there are simply not enough safe places, treatment facilities and options for those dealing with these problems.  So they are arrested … as Karen Keltz states below, this is a reality that we as a society have been dealing with for decades. Karen (wife of Pioneer’s guest columnist Neal Lemery) provides this series recommendation following Neal’s “Shirt off by back” story … a very timely recommendation indeed.

I have just finished watching a wonderful Britbox series, called “Time.” Not only is it well-acted, but the story line reveals much of the problems with the effects of trauma in our society today; how prisons and jails have to deal with the mentally ill because there are too few mental health facilities and the ones that do exist are full to overflowing; how prisons as they are run today do not accommodate healing and reparation; and, how hard it is to combat prisoner-network systems in order to come out a whole person when a term is ended. Not only that, but the personal lives of guards is examined and how difficult it is for them to stay grounded and empathetic.

I will speak to the first of these issues, because it’s been a problem plaguing me as an educator and my husband as a jurist, for three decades. However, the problem has been in progress for at least four decades now.

Oregon has a population of approximately 3.9 million people. Close to 4.6% of adults in Oregon (according to SAMHSA) live with serious mental health conditions such as schizophrenia, bipolar disorder, and major depression. https://www.rtor.org.>directory>mental-health-oregon

The Salem campus has the capacity to serve up to 554 people at a time, and the Junction Campus can serve up to 96. https://www.oregon.gov

The latest count I could find said there are 577 places to be had, statewide. https://www.ahd.com

This disparity between those needing help and those providing help is not better, nationally. Nor according to this series taking place in England, internationally.

As of 2014, the year for which the most recent data on specialty mental health providers are available, there were over 170,000 residents in inpatient and other 24-hour residential treatment beds on any given night, an average of over 53.6 patients per 100,000 population.

How many people are in mental hospitals today?

At their highest peak in 1955, state mental hospitals held 558,922 patients. Today, they hold about 35,000 patients, and that number continues to fall. For various reasons, these community treatment plans proved inadequate, leaving many of the mentally ill homeless or in jail.

In most states, an involuntary psychiatric commitment cannot extend beyond 72 hours without a formal hearing. This 3-day period allows patients to receive basic medical treatment, recover from psychotic episodes and hopefully understand the need for further help.

So what happens to the overflow?

In 1981, Congress and President Reagan changed how services were offered to those with mental health problems. The idea was that instead of the state hospitals serving them, their individual communities would come up with solutions such as in-home care, group homes, and walk-in facilities. Obviously, that didn’t happen. Instead, increasingly over the years since, the justice system has been forced to take over the problem, officers and prison guards, with no training, no skills, and no funding.

While at least half of prisoners have some mental health concerns, about 10 percent to 25 percent of U.S. prisoners suffer from serious mental illnesses, such as major affective disorders or schizophrenia…

“Part of what’s really swelled our jail and prison population, especially our jail population, is our inability to deal with the mental health crisis that we’re facing in this country… We have an enormous number of people who are suffering from very treatable illnesses who are not getting treatment and who end up getting caught in the criminal justice system as opposed to the mental health system.”
https://www.apa.org › monitor › 2014/10 › incarceration

I have known about this problem since the early 90’s because of personal family experience, and because my husband, a former judge, described what was occurring in our state and how difficult it was to have those who needed help, placed. He saw the same offenders repeatedly because they needed someplace safe to stay, so they would commit small crimes in order to be incarcerated where they would receive a bed and meals and some modicum of safety. Our homeless problems are really mostly mental health problems.

That needs weren’t being met made me concerned then and I’m concerned still. I am thankful that more and more counselors in schools are understanding and working with victims of childhood trauma, difficult, demanding, but oh, so necessary work. My daughter, a nurse, believes that if nurses and parents were in schools and engaged in a system of dealing with trauma from day one, our whole society would improve within two decades. It would make sense to spend money on mental health services instead of building bigger prisons.

Again, I recommend this series to you, because it is reality, and because it is time to mend this and others of society’s ills. The more we know and realize, the more we can help in our respective professions.