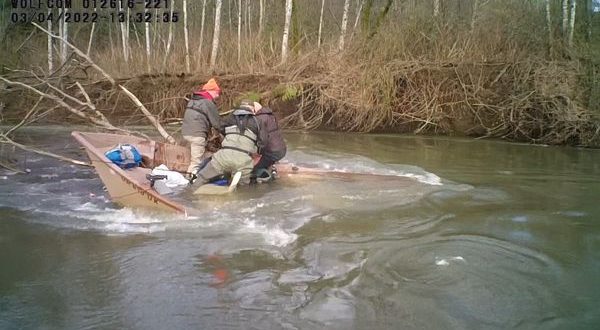 TCSO is proud to recap a water rescue performed by two of our Marine Deputies while on routine boat patrol. On March 4, 2022, at approximately 1:00 pm, TCSO Marine Deputies Kelly Awe and Dennis Greiner were drifting the Wilson River near the Upper Josi Hole.
“Deputy Awe was on the oars when we witnessed a tan fiberglass drift boat occupied by three male adults impact a root-ball abeam and took water on over the port gunwale, sinking the stern,” said Deputy Greiner. “We were approximately 50 feet up-river from the drift boat as they hit the root ball.”
Deputy Awe rowed around the root ball into a back eddy. They positioned the stern of the TCSO drift boat close enough to rescue the three males from their now half-submerged boat, which was pinned to the root ball. 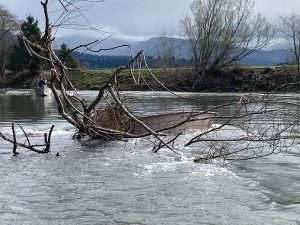 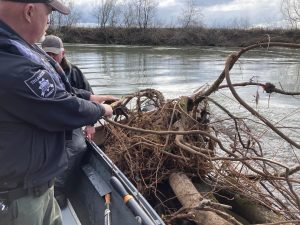 The three men were each wearing inflatable PFDs. Deputy Greiner administered first aid to the owner of the boat who had sustained a minor injury to his hand when a finger got pinched between the boat and the root ball. Deputies then floated down the river with the men, retrieving gear that was floating or had been recovered by other boaters. 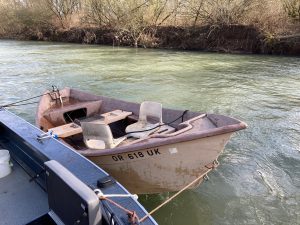 Deputy Billy Cloud responded to the Sollie Smith boat ramp with a TCSO jet boat as the three men were brought to shore there, Deputies then used the jet boat to return to the submerged drift boat and were able to free it and refloat it. It was towed back to the boat ramp and returned it to the owner.
“This is another great example of the kind of people we have working here at the Tillamook County Sheriff’s Office,” said Sheriff Joshua Brown. “I’m very proud the job our deputies do every day, and their professionalism on this day helped to avoid a tragedy.”
Interested in a career where everyday is an adventure and you make a positive impact on your community? Apply at tillamooksheriff.com