TILLAMOOK — Much like the plants on display in its windows, Downtown Tillamook’s newest store has a backstory rooted in growth.
What started as a seedling position as a wedding florist for a few friends flourished into a full-fledged business run out of a home. Then it grew more, moving into a back room at another downtown business until finally blossoming this fall into its own, stand-alone brick-and-mortar store.
“When I moved here in November of 1982, downtown was huge. Ever since then, it’s always been something I wanted to be involved in,” said Leilani Martin, who recently celebrated the grand opening of Riverside Floral, her new storefront at 2014 Second St. The locally owned florist and home décor store gives life to Martin’s years-long dream to run her own downtown business.
“I felt like we could really use another gift shop downtown,” Martin said. “And now, with everything that’s going on with the pandemic and staying indoors more, people can visit us to buy houseplants to bring a little bit of the outdoors in.”

Hooked on flowers
Martin’s time working with plants and flowers dates back several decades. She said she’s always been interested in learning about plants and flowers, and she’s an avid owner of houseplants herself.
“I just think it’s really interesting to learn about what each different plant needs to grow best,” she said.
She started helping with the floral department at the Tillamook County Fair in 1996, and she’s spent the last six years as one of the department superintendents. Her official foray into the floral business, though, happened in 2010.
“A friend asked me if I could do the flowers for a wedding, and I said yes,” Martin said. “After that, another friend asked. And then another. It kind of snowballed from there, and I got hooked on it.”
For several years, Martin created wedding arrangements through an at-home business she called Riverside Floral. Occasionally she sold houseplants and other floral products at regional retail bazaars. She also worked as a local beautician, a career she’s held for 40 years.
However, as she gained a reputation for beautiful arrangements, her floral business grew — and she began to look for a way to expand upon that interest.
She found a larger home for Riverside Floral last year, when she moved into a back room at West Elliott Boutique, a clothing store run by her extended family. Although the new location was a great start, Martin dreamt of growing even larger.
“At West Elliott, I didn’t have a cooler. I could have installed one, but I just felt like I needed more room,” Martin said. “When the space on the plaza opened up, and it had so much light, I decided to give it a try. I knew the houseplants would love those big windows.”


As Martin arranged to start her first brick-and-mortar storefront, she consulted her support system for advice. She said her husband, Jim, played a huge role in supporting her decision to switch directions from primarily styling hair to focusing on florals.

“At times, he’s not always so sure, but he’s always been a good support,” Martin said. “This is a new adventure for me, and I couldn’t have done this without him.”
Martin also relied on Sue Petty, one of her business mentors. The former owner of La Tea Da, Petty advised Martin to include home décor and gifts at her shop to help support sales.
Martin reached out to a few long-time friends and family members who she worked with at the bazaars to bring in additional products. Her partner vendors include Linda Masterson, who sells furniture; Nancy Reddekopp, who crafts birdhouses and signs; and Pink Eggert, who makes signs; and Stephanie Lewis, who offers vintage vases. The shop also stocks stationary, jewelry, throw pillows and blankets and other home goods.
“Having the gift shop is a new experience, but it’s a good fit,” Martin said.

As her shop takes root, Martin hopes to further grow its offerings. She envisions a once-a-month event where shoppers can stop in for their morning coffee or a light lunch while they browse the stock.
She also looks forward to partnering with other downtown businesses and organizations, including the Tillamook Chamber of Commerce.
“As things start smoothing out, I’m excited to become more involved with the Chamber and other businesses to make downtown more supportive for our customers,” she said. “And I really want to hear from the customers as to what they would like. I just want to give back and add to the vibe in Downtown Tillamook.” 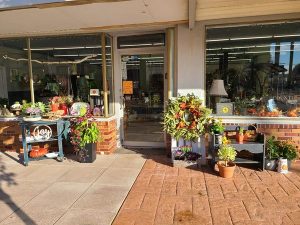 Riverside Floral is located at 2nd and Pacific in Downtown Tillamook, www.riversidefloral.com
(503) 812-7863 or email to lonij1985@gmail.com