EDITOR’S NOTE: Tillamook County residents spent an uneasy Saturday morning as emergency alerts went out advising of the shooting and homicide in Sandlake, South Tillamook County and a suspect “on the loose.” The best part of the day according to some observers was during the Tillamook Dairy Parade when everyone’s phones alerted them that the suspect had been captured and arrested, and everyone cheered! Thank you to TCSO and all the responding agencies.
On June 26, 2021, at 3:34 am, Tillamook 911 received a report of a shooting that had occurred at Sand Lake Recreation Area in south Tillamook County. Officers from Tillamook County Sheriff’s Office (TCSO) and Tillamook City Police (TPD) responded immediately to the scene.
Upon arrival, first responders from Tillamook Ambulance and Nestucca Fire-Rescue began treating an unconscious 30-year-old white male adult with multiple gunshot wounds. A Lifeflight helicopter also responded. Despite heroic efforts by emergency medical personnel, the male was pronounced deceased at the scene.

The suspect was identified as Brandon Jose Zavala-Satalich, 18, of Troutdale. Zavala-Satalich was armed with a handgun when he fled the scene with a juvenile female prior to the arrival of law enforcement. Sheriff Joshua Brown and Undersheriff Matt Kelly responded to the scene. The Tillamook County Major Crimes Team was activated, and additional law enforcement officers were called in to assist.
“This included officers from the Oregon State Police and Manzanita Police,” said TCSO Undersheriff Matt Kelly. “Lincoln County Sheriff’s Office sent two deputies including one tracking K9 unit, and Hillsboro Police also sent a tracking K9.”
“At 5:28 am, TCSO Sand Lake Deputy Tom Mayne saw the suspect crossing Galloway Rd. A containment perimeter was set up and searches for the suspect were underway as TCSO detectives began their homicide investigation. The female juvenile that fled with the suspect was located quickly and unharmed,” said Undersheriff Kelly.
“Tillamook 911 used the reverse 911 system to notify residents with landline telephones of the situation, and we also sent emergency alerts to all cell phones located within Tillamook County informing residents and visitors alike that we had a homicide suspect at-large in the Sand Lake Area.”
At around 11:20 am, suspect Brandon Jose Zavala-Satalich was captured by the Lincoln County K9 unit accompanied by OSP officers and TCSO deputies. The suspect was located hiding in an area close to where Deputy Mayne had observed him crossing Galloway Rd. 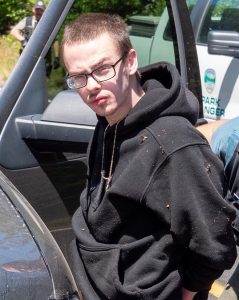 Brandon Jose Zavala-Satalich was transported and lodged at the Tillamook County Jail and initially booked on charges of Murder in the Second Degree and eight counts of Recklessly Endangering another person.
The female juvenile that had fled with Brandon Jose Zavala-Satalich, was taken into custody of the Tillamook County Juvenile Department and faces charges of Criminal Conspiracy, Hindering Prosecution, Tampering with Evidence, and Interfering with a Police Officer.
This investigation is ongoing. TCSO is not releasing the name of the victim due to family requests.