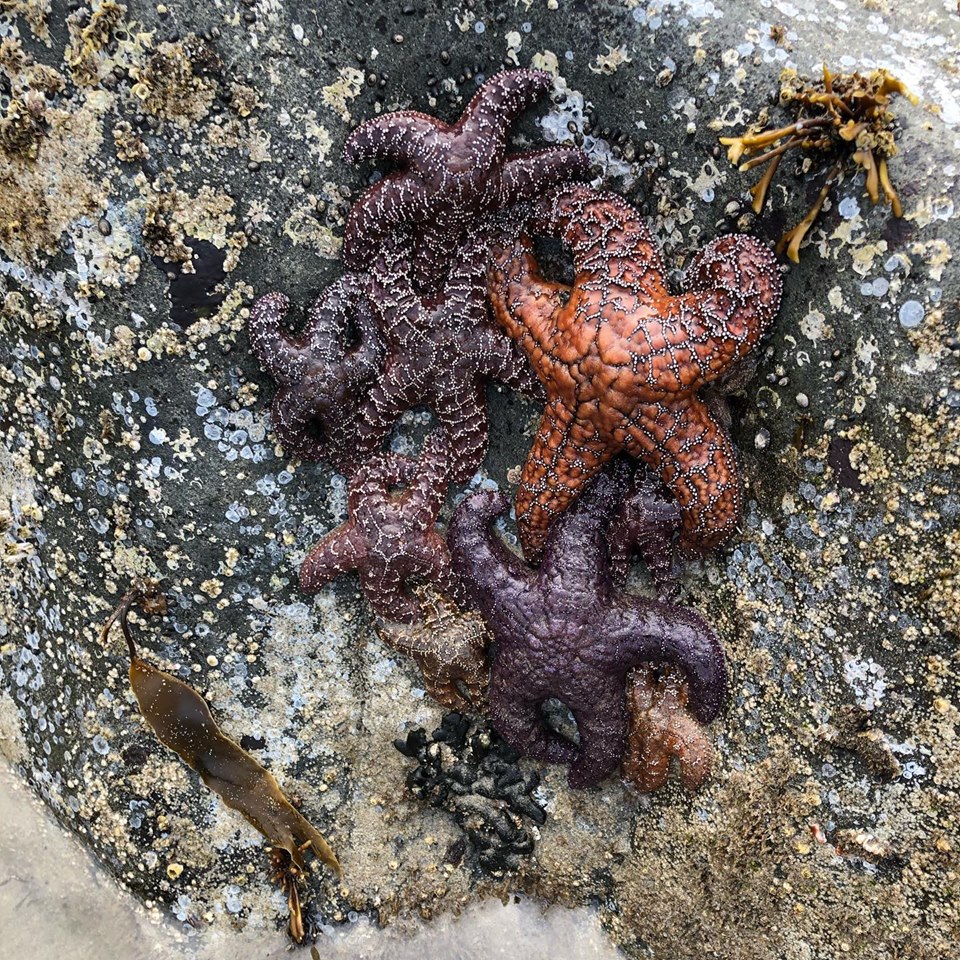 By Dan Haag
Attendees of the season’s first Nature Matters talk at Fort George Brewery in Astoria on Thursday, October 10th were treated to a fascinating overview of the impact of sea star wasting syndrome (SSWS) on Oregon’s sea stars and the impacts on intertidal ecosystems by Oregon State University’s Silke Bachhuber. The event was sponsored by Friends of Cape Falcon Marine Reserve, Lewis and Clark National Historical Park, and North Coast Watershed Association.

The outbreak of SSWS in 2013-14 is the largest marine disease outbreak ever documented in a non-commercial species. Over 20 species of intertidal and subtidal sea stars were affected from Alaska to Baja California. Since the outbreak, the disease has persisted at low levels and continues to kill sea stars. The cause of both SSWS and the outbreak are unknown, although marine biologists have been working hard to find answers.
Once common in the subtidal, sunflower sea stars are still sparse or non-existent on much of the U.S. West Coast. The ochre sea star, an iconic sight in Oregon’s rocky tidepools, was also hard hit by the SSWS outbreak. Populations have not recovered to pre-outbreak levels and the animals are doing better in some locations than in others.
Both ochre sea stars and sunflower sea stars are considered keystone species because of their disproportionately large influence on other species in their ecosystem. The loss of these top predators results in a “trophic cascade,” where changes in the relative populations of the ecosystem’s species change as a result. For example, the loss of the ochre sea star in the intertidal results in a boost in the population of mussels, which the ochre stars eat.


Teams of scientists are working on determining causes of the outbreak and ways to help sea stars on the West Coast. Bachhuber encouraged audience members to participate in community science projects to document sea stars and SSWS through the Multi-Agency Rocky Intertidal Network (MARINe). For more information, visit www.seastarwasting.org
Next up are back-to-back presentations in mid-December on “Life on the Rocks: Oregon’s Rocky Shore Habitats”
•Wednesday, December 11, 2019 at 7 pm, “World of Haystack Rock” Lecture Series, Cannon Beach Library (131 Hemlock St., Cannon Beach, OR)
•Thursday, December 12, 2019 at 7 pm, Lower Nehalem Watershed Council, Pine Grove Community House (225 Laneda Avenue, Manzanita, OR)
At both presentations, you will get the chance hear about the importance of rocky shore ecosystems, unique habitat adaptations of the fascinating organisms that live there, and historical protections for these areas. You will also learn about Oregon’s current process to update the state’s special rocky habitat designations, during which the public will have the opportunity to make proposals and recommendations for special management areas like the marine garden at Haystack Rock.
Charlie Plybon is Oregon Policy Manager for Surfrider Foundation and Chair of the working group responsible for drafting the update. He will be joined by Department of Land Conservation and Development staff working on the update process.