A broadnose sevengill shark (Notorynchus cepedianum) washed ashore yesterday Sunday June 26th at the south end of Arcadia Beach State Park, north of Cannon Beach. The 8.7-foot female shark had died prior to washing in but was still in remarkable shape. This morning June 27th the tide was low enough for us to recover the 120-pound shark, which will be frozen and used as both an educational tool and for ongoing research through Oregon State University. 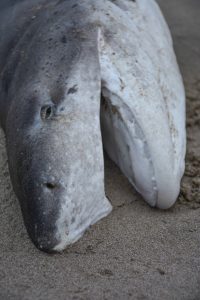 Broadnose sevengill sharks are one of seventeen species of sharks that can be found off the Oregon Coast. While they are known for their aggressive behavior when feeding (and the fact that they can get quite large, nearly 10 feet and weighing up to 400 pounds) there has not been a documented attack on a human along the Oregon Coast. Worldwide, they have only been responsible for 5 attacks on humans since the 17th century. None of which were fatal. Though the jury is still out on that one since human remains have been found in the stomachs of some sevengills.
Like their name suggests, the broadnose sevengill shark is unique in that it has seven gills while most species of sharks have five gills (apart from two species of sixgill sharks, which you have already probably guessed have six gills). They can be found off the eastern and western Pacific, Argentina, and South Africa in estuaries, bays, and at ocean depths from nearshore to 400 feet. Smaller sevengills feed on fish and squid but as they get bigger, they start to prey on marine mammals and are known to hunt in packs.

Here is a video of today’s recovery: