Beach goers got quite the memorable experience this Labor Day weekend. Staff from the Seaside Aquarium were alerted the night of September 2, 2022 of another large thresher shark washing in on the Long Beach Peninsula by Ocean Park. The shark was still alive when staff arrived but died shortly after. With some much-needed help, volunteers and staff were able to recover the shark, which weighed anywhere from 300 to 365 pounds. Like the 12-foot thresher shark that washed ashore on August 18th, this one was too big to freeze. So, a necropsy was scheduled for the next day (9.3.22) at 1:00 p.m. We really wanted this to be a learning experience for people. It is not very often that we get to see these large sharks and anything we can learn or educate the public on is a great opportunity.

From 9:00 a.m. to 11:00 a.m. on September 3rd, the shark was available for public viewing, during which we announced when and where the necropsy would be for those interested. We ended up having an audience of about 50-75 people. It was a great crowd. People were really interested and asked a lot of great questions. Most people were fascinated by the length of the shark’s tail, in which it is named after. The thresher shark uses its long tail to “thrash” through schools of fish, stunning them, then swimming back through and eating the stunned fish.
So, why are these sharks washing in? That is the million-dollar question and that is why it is important to be able to collect data and various tissue and organ samples. The one thing we were able to rule out was any fisheries interaction.
Here are some images from the necropsy – photos by Seaside Aquarium: 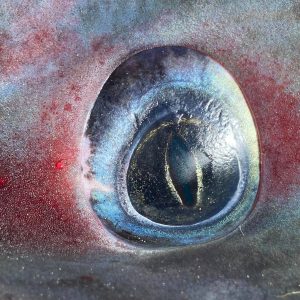 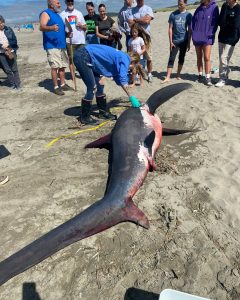