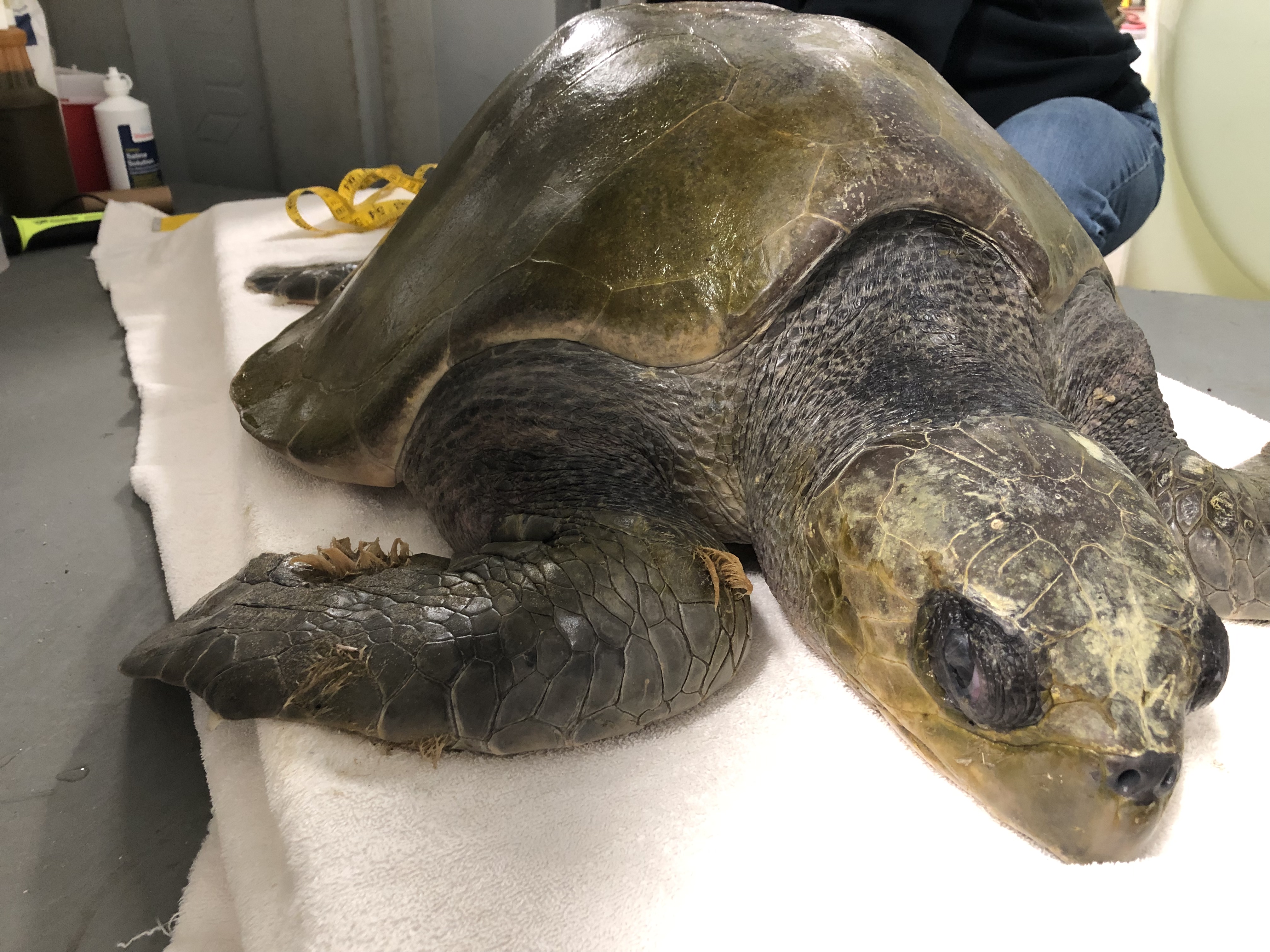 Newport, Oregon – A second female olive ridley sea turtle is under care at the Oregon Coast Aquarium after stranding in Beachside State Park in Waldport on Saturday morning, December 15th.
The sea turtle will join the other female olive ridley that arrived on Thursday in the Aquarium’s climate-controlled quarantine space designated for sea turtle rehabilitation. The two sea turtle strandings took place amid high winds and hazardous surf conditions on the Oregon coast this week.

The Aquarium received the call for the stranded turtle at 10:05 a.m. on Saturday, December 15th from a couple walking the beach. Fortunately, the beach goers had heard the Aquarium’s PSA about sea turtle strandings on the radio. Oregon State Park Beach Ranger, Doug Sestrich, transported the sea turtle off the beach for Aquarium staff to pick up and bring back to the facility.


The olive ridley sea turtle has a good body condition at 59.2 lbs, with an intact shell and no external bleeding. Her body temperature measured 50° F, which is still far below the healthy temperature of 75° F. Aquarium staff rinsed the turtle, applied lubricant and administered fluids as part of standard intake protocol. X-rays and blood tests will follow.

The first olive ridley sea turtle’s strong fight to survive and bright purple bandaging has earned her the name “Donatello,” from Teenage Mutant Ninja Turtles, among Aquarium social media followers. Aquarium staff agreed with the sentiment. X-rays, fecal tests and blood analyses on the turtle were promising, with no sign of infection or parasites.
Aquarium staff will work to slowly raise the internal temperature of the sea turtles to between 65-70° F and continue to administer fluids twice a day. If the sea turtles’ conditions continue to improve, staff will begin to coordinate the turtles’ transport south to SeaWorld San Diego. Once there, they will continue rehabilitation in the hopes of eventual release.
The Pacific coast breeding populations of olive ridley sea turtles are listed as Endangered under the Endangered Species Act. Thus, the rehabilitation and release of these individual, reproductively-viable animals can be significant for species survival.
Winter storms and transitioning ocean conditions can push sea turtles northward, sometimes far beyond their tropical and warm temperate ocean habitats. As the cold-blooded reptile’s body temperature decreases, they lose their ability to swim and feed effectively. The sea turtles then rapidly grow weak and can end up stranding on Pacific Northwest beaches.
If you find a sea turtle on the beach, immediately note its location, remain nearby to observe it, and contact the Oregon State Police Tipline at 800-452-7888 or the Marine Mammal Stranding Network in Oregon, Washington, and California at 1-866-767-6114.
If you are interested in contributing to the sea turtles’ care, you can make a tax-deductible donation to the Oregon Coast Aquarium, a 501(c)3 nonprofit organization, at www.aquarium.org/give. For more information, visit aquarium.org or call (541) 867-3474.
The Oregon Coast Aquarium creates unique and engaging experiences that connect you to the Oregon Coast and inspire ocean conservation. An accredited Association of Zoos & Aquariums institution, this 501(c)3 non-profit organization is ranked as one of the top 10 aquariums in the U.S. Visit us at 2820 S.E. Ferry Slip Rd., Newport, OR. www.aquarium.org, 541-867-3474. Follow us on Facebook.com/OregonCoastAquarium, or Twitter.com/OrCoastAquarium for the latest updates.