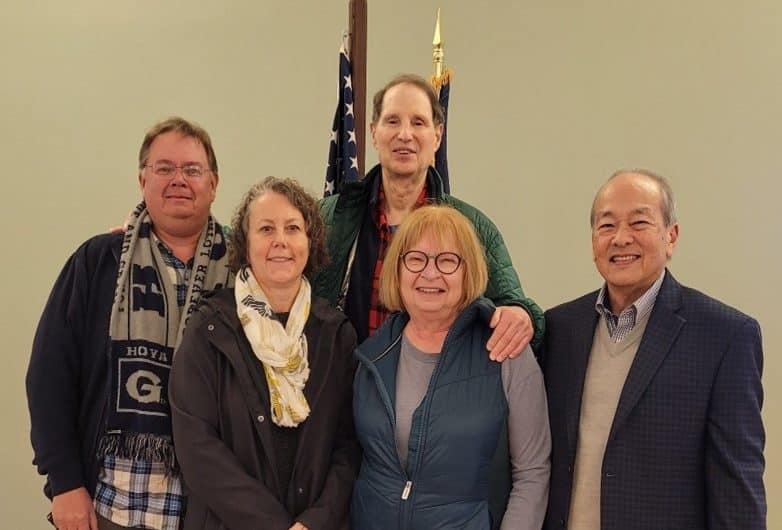 The Officers Mess Hall at the Port of Tillamook Bay was just a few seats shy of capacity for Senator Wyden’s Town Hall on Sunday, January 8th. Senator Wyden gave a brief overview of the committees he chairs, focusing on the bi-partisan Infrastructure Bill that has brought funding to the state. Tillamook county will receive:

Everyone was given a ticket when they signed in. The other half was put in a bowl. When it was time for Senator Wyden to listen, David Yamamoto, Chair, Board of Commissioners, started drawing numbers and calling them out to determine order of speakers from the audience.

Bay City Mayor David McCall gave an update on the status of the new well being drilled and the upgrade of the water treatment plant with the funding the city has received. Mayor McCall also stated to Senator Wyden, “I want to commend your staff. They have been amazing with their help and guidance getting through this project.”

Constance Shimek spoke about our treasured estuaries sharing information on the balance of sport fishing and recreational uses. She shared with the Senator her concerns from storm damage that has created many hazards as well as impedes fish migration. She recommended people check out www.salmonsuperhwy.org.

Constance Shimek and Senator Ron Wyden. Senator Wyden stated,” maintaining our estuaries and fish runs for recreation and fishing is such a huge part of who we are in Oregon. Our estuaries are treasured.”

Kaylan Sisco, CEO/Executive Director of the YMCA in Tillamook brought up the barriers of childcare and the need for changes in federal rules. He told Senator Wyden that there have been changes on the state level, but it is not enough. Senator Wyden asked staff to set up a meeting with Mr. Sisco to discuss these barriers and solutions to meet the needs of parents with childcare.

Rockaway Beach City Councilor Mary McGinnis asked about the River Democracy Act and how it will protect our rivers from pollution without hindering recreational use. The Rivery Democracy Act of 2021, “…designates specific river segments, primarily in Oregon, as components of the National Wild and Scenic Rivers System.” Check out S.192 to read this bill.

Throughout the Townhall, Senator Wyden took many notes as citizens spoke and he directed staff to set up meetings on several key items.