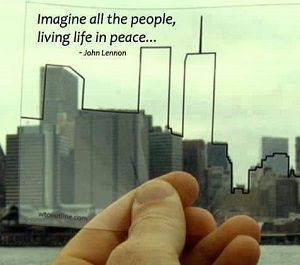 EDITOR’S NOTE: Sharing stories from community voices – that’s what the Pioneer is all about, and especially on “significant” days. It’s been 20 years since 9/11 became stamped in permanent ink as “one of those days.” We all can recall “where you were when the planes hit and the buildings fell?” Vividly I remember standing in our living room in Beaverton staring in disbelief at the news, then watching it live and in horror as a second plane hit the other tower. Surreal at best and as many have said “like a movie” but really happening. As the day played out and then the following weeks, what I remember most was the silence in the skies as all air traffic – accept for military planes – were grounded. Many are saying to remember how we were as a nation on 9/12/01, but it really was how we came together over the next few weeks and the realization that we – Americans – were just as vulnerable as other countries to terrorist attack. Our mindsets were forever changed … as we continue to come to grips with yet another historic time, let us all remember, to learn and do better. Thanks to Robyn Herrick for sharing her story here about her 9/11/01.

Let’s talk about human life for a sec. Our world is suffering so much loss right now, and there is so much hate directed specifically at the value placed on human life, so this story seemed relevant today.
It seems that every generation has its own defining historic events. I imagine the pandemic will be one for my children’s generation. I can think of a few that define mine. The Challenger and Columbia shuttle explosions, the Thurston and Columbine school shootings, the Oklahoma City bombing, and the attacks on the World Trade Center Towers.