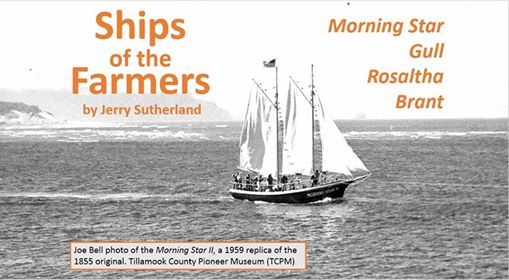 The Tillamook County Pioneer Museum’s Great Speaker Series is pleased to present Portland historian Jerry Sutherland discussing “Ships of the Farmers” on Sunday, March 10, at 1 p.m. Using a PowerPoint full of
maps, original manuscripts, photos, and other images, he will tell the story of ships being built by Tillamook pioneers in the mid-1800s.

Sutherland has written a book about “Calvin Tibbets: Oregon’s First Pioneer.” During that research at National Archive branches in Seattle and San Bruno, looking for more information about the Pioneer—a schooner Calvin Tibbets helped build and sail to California in 1848—Sutherland was surprised to discover the Morning Star was not the
only ship built by Tillamook pioneers. When he shared this information with Pioneer Museum staff, they quickly added him to the list of speakers.
“It fascinates me that sailing ships capable of ocean travel could be built in the wilds of Oregon in the 1850s. I especially enjoyed learning that Tillamook ships had Indian crew members and plan to point that out in my presentation,” says Jerry Sutherland.
He continues, “I first learned about ships other than the “Morning Star” having been built by Tillamook farmers while searching US Customs records at the National Archives in Seattle for additional information about the “Pioneer” built by Clatsop farmers in 1849 that I wrote about in my book “Calvin Tibbets: Oregon’s First Pioneer” to use for presentations in Clatsop County. I thought it a story worth telling and TCPM agreed. My PowerPoint will include historic maps, manuscripts and journal pages from NARA, portraits of the pioneers involved, and photos of the “Morning Star II” construction to show it was done.” From Portland, Sutherland has spent a lot of time in Tillamook researching for articles at www.bayocean.net.
Sutherland has also written 72 articles about Bayocean since 2015, spending many days researching at
Tillamook institutions, interviewing Bayocean alumni and government officials, and exploring Bayocean Spit.
Sponsored by the Tillamook County Pioneer Museum’s Daisy Fund, it is free and open to the public.
Tillamook County Pioneer Museum, 2106 2nd St., Tillamook, OR,97141.
For more information, call 503-842-4553