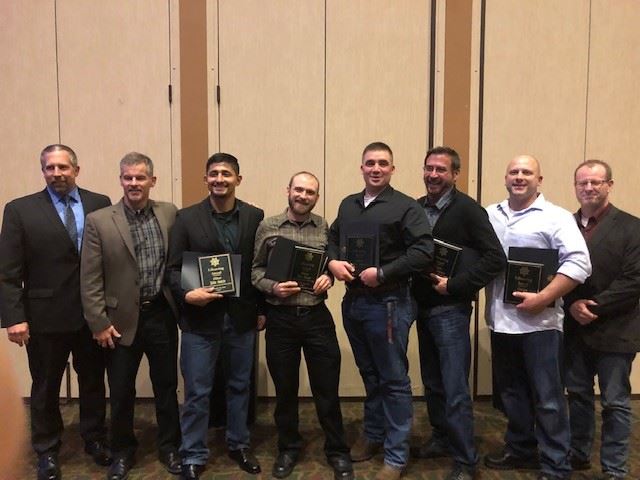 Manzanita Police Officer John Garcia received a life-saving award for his efforts in assisting a swimmer in distress in the Pacific Ocean. Officer Garcia entered the water, and using a borrowed boogie board, was able to reach the person in distress and assist them safely back to shore.
Oregon State Police Fish and Wildlife Division’s Sgt. Greg Plummer received a life-saving award for his efforts in also assisting a person in distress in the ocean. Sgt. Plummer entered the Pacific Ocean in Pacific City and rescued a surfer in distress, pulling the person safely to shore.
Tillamook County Sheriff’s Deputy Benjamin Berger and Oregon State Police Trooper Walter Andrew Silkwood received their life-saving awards for an incident in which they jointly searched for man who had taken psychedelic drugs and had wandered off and was considered missing and endangered. The two officers located the man after several hours of hiking. Because the man was hypothermic, Deputy Berger started a fire to warm the man before he was returned safely.
Oregon State Police Fish and Game Division’s Trooper Aaron Miller and Tillamook County Sheriff’s Marine Deputy Paul Fournier received life-saving awards for their actions in recovering a commercial diver who had drowned while the officers were on boat patrol on Tillamook Bay. When the two officers retrieved the diver from the water, he was unconscious and not breathing. Trooper Miller performed CPR on the diver as Deputy Fournier rushed him to an awaiting ambulance. The diver was resuscitated successfully while in the police boat and subsequently made a full recovery.
“I am very proud of these officers and their heroic and selfless acts while performing their duties. They represent the kind of men and woman that serve and protect the residents and visitors of Tillamook County every day,” said Tillamook County Sheriff’s Office’s Lt. James Horton. “It is also an example of the unique cooperative working environment that exists here in Tillamook County between all of our law enforcement agencies.”