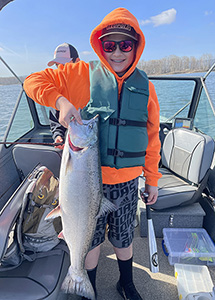 Fishery performance will be monitored in-season. A mid-run update is expected in May and spring Chinook fishing opportunity may be added if run size and impacts allow.

Several 2022 spring Chinook indicators are improved over 2021. The overall forecasted return of adult spring Chinook to the Columbia River mouth (including both upriver and lower river stocks) is 197,000 fish. This is an improvement over last year’s actual return of 152,695 fish though still only 86 percent of the recent 10-year average.

Spring salmon seasons are driven by returns of upriver spring Chinook. This year’s forecasted return of 122,900 fish is also higher than last year’s actual return of 91,756. In another sign of improvement, returns to the Cowlitz, Kalama, and Lewis rivers are projected to meet hatchery escapement goals, so last year’s boat angling exclusion bubble at the Cowlitz River mouth is not in effect this year.

Open dates can change during the season if/when guidelines are expected to be met. Always check your Angling Zone in ODFW’s Recreation Report /Fishing Report before fishing to make sure regulations haven’t changed, https://myodfw.com/recreation-report/fishing-report/

Anglers are reminded that the use of barbless hooks is required when angling for salmon or steelhead in mainstem Columbia River waters from the mouth upstream to the OR/WA state line.

Sandy, Clackamas, and lower Willamette rivers
Fishery managers are forecasting that 51,200 adult Willamette-origin Chinook will return, which would be an increase from last year’s actual return of approximately 41,300 fish.

The two-rod validation costs $28 and is also valid in most ponds and lakes in the state. Youth anglers under age 12 may use two rods in waterbodies where they are allowed without purchasing the validation.

Select Area Recreational Fisheries (Youngs Bay and Blind Slough/Knappa Slough)
Effective March 1 through June 15, on days when the mainstem Columbia River recreational fishery below Bonneville Dam is open to retention of Chinook, the salmonid daily bag limit in Oregon and Washington Select Areas will be the same as mainstem Columbia River bag limits.