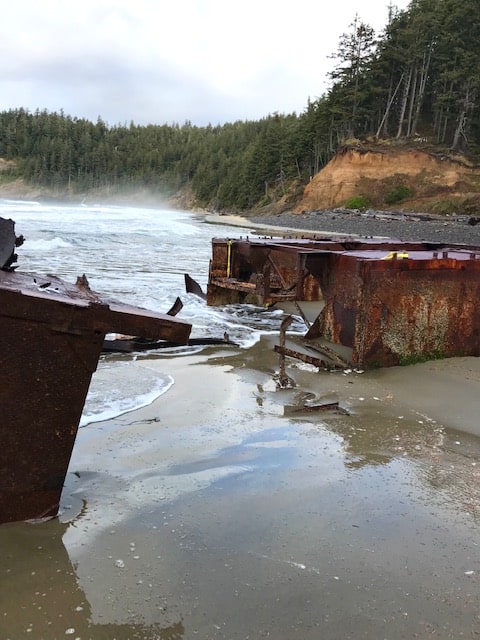 Even before the North Coast was battered by high seas and strong winds last week, large metal structures had washed up on area beaches. First on Rockaway Beach and then in early December on Short Sand Beach in Oswald West State Park. The Pioneer reached out to Nehalem Unite manager Ben Cox about the debris, which has now been pushed all the way up the beach and into Necarney Creek causing concern my beach visitors.

According to Ben Cox, disposal/removal of beach debris is triaged and prioritized by a number of factors, not the least of which are perceived or known hazard, and accessibility to the debris. “The portion of the marine work platform that came ashore at Rockaway Beach was deemed a hazard because of the sharp metal on it, but more importantly was in a very accessible location,” said Cox. “We were able to contract with Coastal Towing for a quick response.” 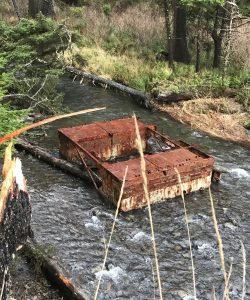 A bigger section of that same structure came ashore at Short Sand Beach. It had the same hazard component as the one at Rockaway — sharp, jagged metal – but is impossible to reach with other than handheld equipment or small utility vehicles. “We had the buoyant foam tested for hazard materials (mainly asbestos) and when those tests returned negative results we realized we had more time to deal with the debris,” explained Cox. “The winter tides are challenging, daylight is short, the weather miserable and plenty of other urgent matters are consuming our attention right now.”

He continued, “So your readers know, we had a variety of people from different disciplines look at that work platform problem; marine salvage folks, fire departments (we thought Jaws of Life might work), we spoke with Oregon Military Department and Office of Emergency Management – we just haven’t found a solution that wasn’t outrageously expensive. Now the recent storms have pushed the thing up into the drainage, complicating matters further. We’ll continue to cut little pieces off when time, weather, tides and labor resources allow. It’ll be a long process. Also FYI – people were insisting the chunks of foam being found on the beach were coming directly from this beached structure but that simply doesn’t appear true. We think that foam is from when the rest of the structure came apart at sea. “

Here’s where things stand in the Nehalem Unit. All parks open prior to the storm are open now.

Hug Point/Arcadia Beach/Manhattan Beach – no major issues to report at this time. Parks are open.