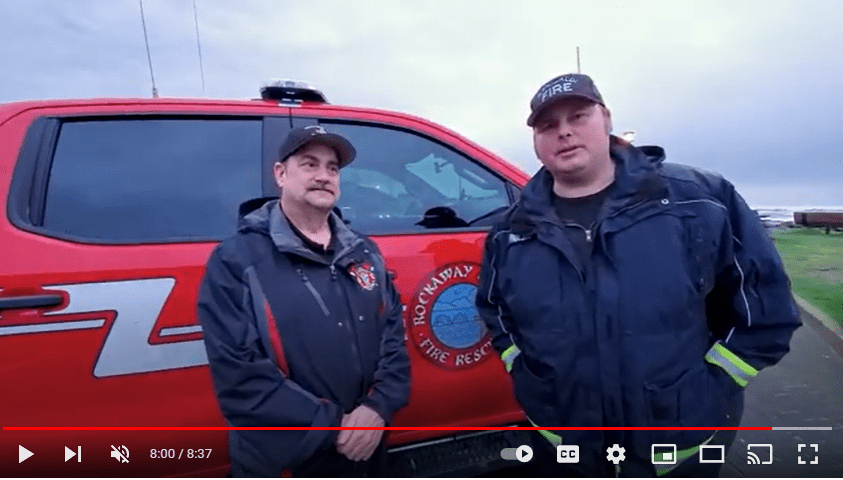 EDITOR’S NOTE: Chief Hesse and Chief Paulsen agreed to create this direct message as there continues to be documented risky behavior on the coast, and a recent death. Coastal residents regularly witness “near-misses.” As an example, while creating news video during recent storm driven high tides from a safe location with a zoom lens, observed a young couple with a toddler down at the waters edge while next to them waves were sweeping in across the entire beach. We contacted Paulsen and Hesse that very day and asked them if they would be willing to create a video. They had their own stories of even riskier recent behavior and were more than willing. Perhaps it is the return to normalcy after the pandemic, perhaps there are new, inexperienced visitors (and residents) choosing to visit the beach. Whatever the reason, it would be a terrible and unnecessary tragedy if someone was hurt or killed, which just occurred this week in Netarts Bay. Tide tables – know about the tides.

As a lifelong residents, we enjoy the ocean and beaches year round. When covering storms, it is with a large zoom lens. A long lens like this has a lot of magnification that creates a visual compression effect, making things look closer together and appearing to bring the storm in closer. Photo and video can be done from a safe location such as in the parking lot at the Rockaway Beach Wayside, back in the parking area at the jetty, and even, at times, from up on the viewing mound at Barview Park. However, sometimes the parking areas at the jetty and wayside aren’t safe.

We want to thank both Hesse and Paulsen for taking the time to create a message. We intentionally created the video with the same tools that any visitor or local would have — a cell phone. We chose that to give the event more realism. The wind and sound of the waves is real. Our hope is that it is effective.

Story & Video by Don Backman
“Please don’t leave your common sense at home.” Todd Hesse, Rockaway Beach Fire Rescue chief, addressed the advice to anyone going to the beaches and headlands along the Oregon Coast in the winter. On January 12, 2023, Chief Todd Hesse and Blake Paulsen, Division Chief and Training Officer from Garibaldi Fire Department, met at the North Jetty in Barview and the Rockaway Beach Wayside to craft a message of safety on the beach and jetty. It was a stormy day like many days on the coast, which can be exciting.

The two fire and rescue leaders chose to speak plainly, and did not mince words as they talked about the threats both on the jetty and the beaches. The two departments have been involved in countless rescues and recoveries over the years. The winter ocean can be a combination of beautiful, powerful, and wild. It can be a thrill to watch. The ocean can also be dangerous. Every winter, there are tragic events along the coast. The goal was to educate beach goers and storm watchers to do so safely.

Hesse and Paulsen spoke about the facts. In the event that someone gets swept into the surf and waves, dedicated and highly trained emergency personnel will respond. However, the very storms that are so attractive can also limit what the emergency responders can do. Stormy ocean surf can be very dangerous to those caught in it and can also be dangerous to rescuers. As Hesse pointed out, anyone caught in the waves may be difficult to rescue. The waves can tumble victims in the surf and drive them into the sand with all the force of the waves crashing down.

Paulsen pointed out the dangers of being out on the jetty during a storm. Waves can knock people down on the sharp jetty rocks where they can be badly injured, people can get thrown into the holes between the rocks, and they can get swept into the sea. Once in the water, the shock of the cold can drive the breath out of them. The sea can then throw them back against the rocks causing severe injuries. During a winter storm, the very waves that are so dramatic also make it very difficult for rescuers to find and get to anyone caught out in the water. Emergency rescue equipment can be very limited by these conditions.

Other dangers can be sneaker waves shooting up the beach and sweeping people into the surf where they can be tossed and banged around. Waves can even come in sideways to the beach and catch people from behind. Hesse pointed out that while a person might think they could get back to their feet, the waves are so powerful they can cause severe injury before sweeping them out to sea.

Both men pointed out the dangers of driftwood. Logs and stumps on the beach may look safe, but sudden waves can cause them to move and roll. People can be struck, crushed under them, knocked into the pounding surf, or all of the above.

Hesse and Paulsen acknowledged the sheer grandeur of winter storms. They want people to be aware of how to storm and tide watch safely, and for them to know the dangers to be avoided.

Do come to the coast, they both said. Please enjoy the amenities. Please do so safely.
Please don’t leave your common sense at home.