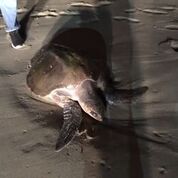 Newport, Oregon – The Oregon Coast Aquarium admitted a severely injured and hypothermic olive ridley sea turtle this morning for care.
Civilians found the turtle the afternoon of December 12th while walking near Horsefall Beach in North Bend, Coos Bay. Pictures and a video of the sea turtle were posted in a Facebook group, “What’s Happening Coos Bay.” Unfortunately, due to the rising tide and dangerously large surf, the turtle was not able to be retrieved before washing back out to sea.
A good Samaritan, Misty White, saw the post on Facebook and a comment linking to the Aquarium’s sea turtle rehabilitation program. “I didn’t think the sea turtle would make it through another high tide,” she explained. “And if the Aquarium could rescue it, then all I had to do was find it.” 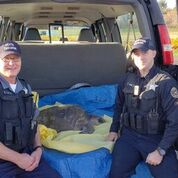 In the late-night hours that followed, White assisted in transporting the sea turtle to the Horsefall Beach parking lot, where it was picked up by State Trooper, Josh Mullins. Mullins brought the turtle to a nearby state police office until early this morning, when Aquarium staff traveled south to Reedsport to retrieve the reptile.

Upon pickup, Oregon Coast Aquarium Curator of Fish and Invertebrates, Evonne Mochon-Collura reported extreme injuries sustained by the turtle, with external bleeding and broken scutes on its carapace and plastron, or top and bottom of shell, respectively. Its body temperature measured 46° F, which is about 30° lower than the healthy, standard temperature of a sea turtle. Staff are currently evaluating the turtle’s condition, administering fluids, taking X-Rays and performing a blood draw.
Oftentimes in cases of extreme cold-stun and injury, the animal is compromised beyond repair. Cold-blooded reptiles like sea turtles are slow to get sick and slow to recover. While the prognosis is uncertain at this time, if a sea turtle is left in the ocean or on the beach, it will die without question. “Thank you to Misty for finding the turtle and making the call to Oregon State Police,” said Mochon-Collura. “If there is even a slight chance of rehabilitation, the Oregon Coast Aquarium will give it our best shot.”


The Oregon Coast Aquarium is the only rehabilitation facility in Oregon authorized to rehabilitate sea turtles. Partnership with other organizations, like the U.S. Fish and Wildlife Service, Oregon State Police, Seattle Aquarium and SeaWorld, is essential to the successful rehabilitation and release of these endangered species. To donate to sea turtle rehabilitation at the Oregon Coast Aquarium, please visit www.aquarium.org/give.
Sea turtles are not found on Oregon or Washington beaches unless stranded. The Aquarium typically sees these extremely sick turtles in the winter, possibly due to the cold water temperatures, changing currents, and high frequency of harsh storms that wash the hypothermic turtles ashore. If you find a sea turtle on the beach, immediately note its location, remain nearby to observe it, and contact the Oregon State Police Tipline at 800-452-7888 or the Marine Mammal Stranding Network in Oregon, Washington, and California at 1-866-767-6114.
The Aquarium is open every day from 10:00 a.m. to 5:00 p.m. For more information visit aquarium.org or call (541) 867-3474.
The Oregon Coast Aquarium creates unique and engaging experiences that connect you to the Oregon Coast and inspire ocean conservation. An accredited Association of Zoos & Aquariums institution, this 501(c)3 non-profit organization is ranked as one of the top 10 aquariums in the U.S. Visit us at 2820 S.E. Ferry Slip Rd., Newport, OR. www.aquarium.org, 541-867-3474. Follow us on Facebook.com/OregonCoastAquarium, or Twitter.com/OrCoastAquarium for the latest updates.