On Saturday December 26th, 2020 the Netarts Oceanside Fire District was summoned by 911 dispatch to a possible hang glider in a tree, near Hwy 131 between Netarts and Oceanside. After responding, crews were able to locate the individual east of “The Capes” subdivision on the east side of the highway, approximately 60-80 off the ground in an extremely brushy area. After blazing trail to the area near the tree the individual was stuck in, command and the rope rescue team formed a few options and set forth with the rescue. 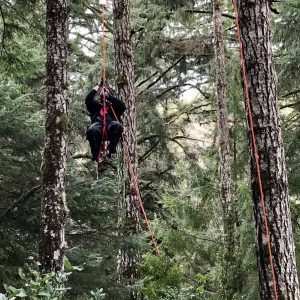 After a team member ascended the tree, he was able to make contact with the hang glider pilot and determine he was uninjured and only needed assistance. A lowering system was set up and attached to the stranded pilot, who was then safely lowered to the ground just before dark and assessed by a crew from Tillamook Ambulance. Netarts Fire & Rescue want to thank all that we’re involved in this very technical rescue, including a helicopter from The US Coast Guard, who hovered over the area on standby and the Tillamook County Sheriffs deputies. 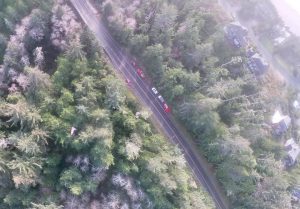 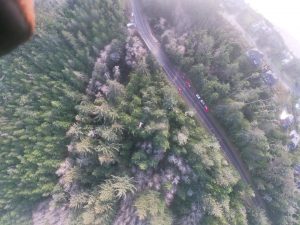