By Representative David Gomberg, House District 10 (email: Rep.DavidGomberg@oregonlegislature.gov)
This week, the Oregon Office of Economic Analysis released the latest quarterly economic and revenue forecast. The news is good. Employment is up and wages are up. The current expansion is now the longest on record.
Money flowing into the state’s general and lottery funds came in $2.6 billion above what officials expected in 2017. That created a situation where Oregon reserve funds are at an all-time high — at more than $3.7 billion — even as economists warn of a possible economic slowdown on the horizon.

Oregon’s unique refund policy also means the state can’t use all of the unexpected money. Under state law, a “kicker” is triggered whenever actual personal income tax receipts come in at least 2% higher than initial projections. In such cases, any money collected above initial forecasts flows back to taxpayers in the form of tax credits.
Oregon taxpayers will see the largest-ever state income tax rebate next year. The top 1% of taxpayers can expect credits of $15,214, while the median rebate will be $346. The average payout to all taxpayers is expected to be $739.
Legislation was proposed this year to limit kicker rebates to $1000 and send the excess to the PERS fund. That measure failed to advance. A total of more than $1.57 billion is expected to flow back to personal income taxpayers after they file their 2019 returns. 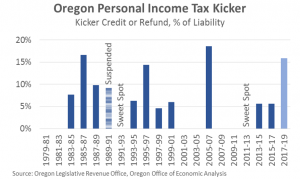 Coastal Economic Summit a Rousing Success!
Last week, over 600 coastal residents, elected officials, state agencies, and advocates gathered for the annual Coastal Caucus Economic Summit. Topics ranged from climate change and earthquake readiness, to water infrastructure and the judicial system, to how the Oregon wine industry partners with coastal tourism.
If you missed the Summit or want a refresher, many of the full panels are now online.
-Congressman Kurt Schrader Interviews Caucus Members.
-Coastal Infrastructure Emergency Preparedness
-Cap and Trade Policy Panel
-Cap and Trade Industry Panel
Looking for some brief highlights? Please take a moment to hear:
My response to a question about earthquake planning.
Hear Kurt Schrader talk about coastal risks.
Senator Ron Wyden discusses the recreation economy, health care, and suicide prevention.
How Oregon’s coastal legislators thrive on consensus.
Congressman Peter DeFazio outlining funding for Shake Alert.
DeFazio on the Coast Guard’s role and budget. DeFazio on the Coast Guard’s role and budget. DeFazio on the Coast Guard’s role and budget.
My assertion that rural Oregon includes the coast.
Attorney General Ellen Rosenbaum on collecting child support.
Representative Caddy McKeown on port jetties.
The Coastal Summit is the largest public policy gathering in Oregon outside of Portland. I was pleased to be a part of it and particularly pleased we have this opportunity to advance coastal and coast range concerns.

Newport Dams are at a Critical Stage
Last week I joined a dozen politicians, community leaders and water experts who went underground and into Oregon’s second most dangerous dam — Big Creek Dam No. 2 —in Newport. One reporter described it this way: “People in blazers and strapped-on booties waded through the dark intake tunnel of a dam, flashlights in hand, stirring rust-colored silt into the water. Spiders and large black crickets scurried across the wet walls. And water trickled from seepage holes — vulnerable breakage points inside the tunnel. ‘This is the stuff nightmares are made of.’”
Constructed in 1951 and 1968, respectively, the lower and upper dams are crumbling, and the soil underneath is at risk of liquefying. This jeopardizes the water supply for residents, local industry, visitors and surrounding communities. More to the point, according to Tim Gross, the city of Newport’s public works director and city engineer, when these dams collapse, they’ll destroy everything and everyone in their path.
I was pleased earlier this month when Governor Brown approved funding from the legislature to begin planning and permitting for dam replacement.
Across Oregon, water infrastructure is crumbling and funding is scarce. We have 75 high-hazard dams, which means if the dams fail, they will result in significant damage and loss of life. Of that number, nine are in poor condition and seven in unsatisfactory condition, according to Oregon Water Resources Department.
Big projects in small towns are hard to pay for. But small Oregon communities like Newport are showing that citizen activism can make a difference. 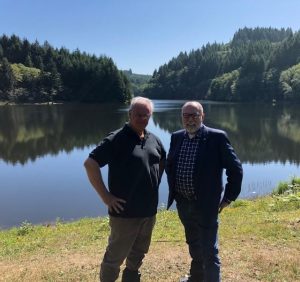 Small Business Help Close at Hand
Here on the coast, our small businesses are the lifeblood of our communities. As a small business owner myself, I know just how daunting the learning curve can be for staying operational. That’s why I’m so supportive of our Small Business Development Centers.
The SBDC at Tillamook Bay Community College has just announced a slew of courses and advising appointments to help more mom-and-pops get off the ground. Topics include “Launch Your Business: The Next Steps”, “QuickBooks Pro for Business: Online Version”, and “Oregon Real Estate Broker Pre-Licensing”. Partial scholarships are available to those who qualify.

For more information about training programs and to see the list of upcoming events you can contact the Tillamook SBDC at 503-842-8222 x1420 or tillamooksbdc@bizcenter.org. To register visit https://bizcenter.org/centers/tillamook-bay-sbdc/our-classes/. Or you can always find them on their Facebook page https://www.facebook.com/TillamookSBDC/.

Out and About in the Tenth District
Over the past ten days I have visited Falls City twice on the east edge of our district – an hour from the beach. This week I answered questions at a Town Hall. Thanks to owners Laura and Laura at The Boondocks for hosting us and to Mayor Jeremy Gordon for his warm introduction.
Next month, I’ll be in Sheridan. On the 13th, I’ll meet with students at the Delphian School then tour Ransom Spirits distillery. On the 19th I’ll join the Sheridan Chamber of Commerce to answer questions, and then on October 1, I’ll host a Town Hall from 5:30pm to 7pm at the High School.
Last week I joined an important conversation with Congressman Schrader regarding proposals for off-shore wind energy projects in Oregon. New clean energy and new jobs are good. But not at a cost to our livability, marine reserves, or fishing fleet. 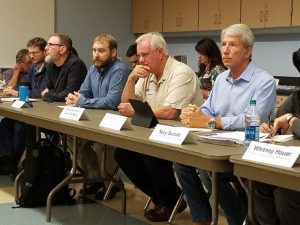 On Tuesday and again on Thursday, I took part in earthquake preparation discussions designed for our local hospitals in Lincoln City and Newport. How will they secure water and fuel after an event? How many injuries might they face? What about additional medical space? Will staff be able to reach the hospitals?
These are all critical questions we need to plan for. We are fortunate to be constructing new, resilient facilities in Lincoln County. I toured the new Newport hospital recently and the new Lincoln City hospital later August 30th.
Susie and I are planning for the Coronado Shores Labor Day Picnic and Toledo Art Walk this weekend. And of course, I continue to attend local Chambers, service clubs, ribbon cuttings, and public events.
A last spurt of warm weather has moved on and it suddenly feels like Autumn at the Coast. Please enjoy a safe and wonderful holiday weekend either celebrating working people on Labor Day or with family and friends.