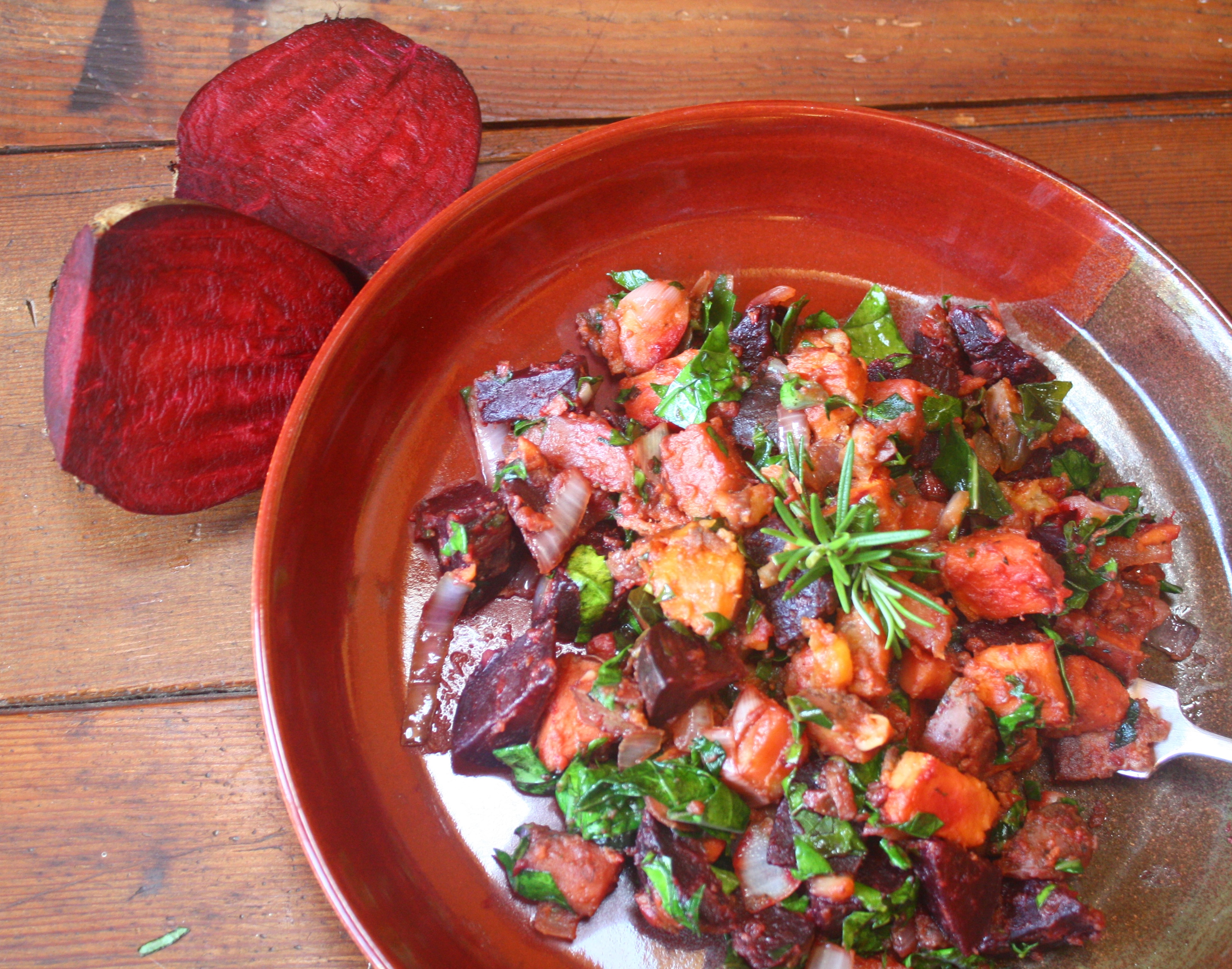 By Dana Zia, The Golightly Gourmet
As I write this the rain is pouring down on the roof, bringing the sounds and smells of fall into stark contrast to the summers ones that were here just a few days ago. The last farmer’s market came to a merry ending and the tail end of the fabulous summer produce is still arriving in our CSA (community-supported agriculture) box. As I open my box now, I see winter squash, potatoes, onions, kale, and the beets keep coming on.

In fact, when I cleaned out my fridge of the last little bits of shriveled summer produce I noticed I had an abundance of those beets to cook. Don’t get me wrong, I love beets, but somehow with the cornucopia of produce that came, they got pushed to the back of the fridge. Maybe it is because I know they will keep a long time and so saved them for just this moment.
Even though I love beets, that is not the case for everyone. I think their strong earthy flavor and vivid color tend to repel some folks but those same attributes attract others, present company included. Also in 10-15% of the adult population the beets fine bright color produces “beeturia”, which is the reddening of the urine and can really concern people even though it is not harmful. They do figure however, that if the beets do that to you, you might have iron issues as in too much or too little of it in your system.
As you can imagine, due to beets wild coloring, it is incredibly full of nutrients and antioxidants but there is another interesting fact to this insanely healthy veggie. Beets were an ancient Viagra used by the Romans and this has been proven to be true by modern science. They get the blood flowing in the whole system, even down there, because they contain high amounts of boron, which is directly related to the production of the human sex hormones. Consequently beets are also very good for the circulatory system and the brain so throw some in everything. (You’ll never know, what might come up! he he)
Soups and stews are the obvious solution to use up lots of beets but there are so many other ways to use them. I love to make a roasted root dish with beets, onions, potatoes, carrots and any other root you can dig up. (Pun intended) Toss them in olive oil, salt and pepper and roast in a hot oven, 40 degrees for 30-40 minutes till the beet is tender when poked with a knife.
One of our beloved dishes this time of year is breakfast hashes. We use almost anything in them but one of our all-time favorites is the red flannel hash. (Doesn’t the name just evoke comfort food in a cabin, cozied up by a fire?) I recommend you serve it with poached eggs and tea. What could be a better way to settle into our change of season? 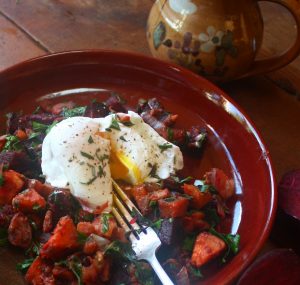 Red Flannel Hash
This dish serves 4-6 hungry people. Easily made vegetarian by omitting the bacon and adding 1 tablespoon of coconut oil to fry the mix in.

Start this comfort food dish out by parboiling the beets and potatoes by boiling them in large pot of water for about 10 minutes. You want them to be firm but slightly cooked. Drain them and let them dry for a few minutes. (This step can be done the day before or you can skip this step entirely and just fry them longer, messy but tactile.)

When the beets and potatoes are ready, cut the bacon into bite sized pieces and fry over medium heat till perfectly done. Remove those juicy meat candy from the skillet and place on paper towel to dry. In the yummy bacon grease, fry the onion and garlic for a minute till fragrant. Then toss in the beets and potatoes and continue to fry, covered, stirring here and there, till they are done, about 7-10 minutes. (if you skipped the parboiling, 15-20 minutes of frying) Add a teaspoon of oil here and there if the mix seems a bit dry. Add the kale at the last few minutes and cook till just done. Sprinkle with fresh herbs and salt and pepper and serve hot and yummy! Perfect fall comfort food.