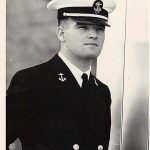 One afternoon in 1971, I was riding the USS Seattle (AOE-3), a giant Navy logistics ship which hauled fuel oil, food, and ammunition to replenish other warships. I had evaluated gunnery exercises that morning, so my workday was done. I was topside enjoying the sun and breeze.

We were in the training area off Guantanamo Bay, Cuba. Several destroyers were scattered around us, each operating within its own five-mile square. Everybody was moving slowly, as they underwent emergency drills in their engine rooms.

The training day ended for everybody at 4 o’clock, and it was time for everybody to “head for the barn” — get back to port. Whoever got there first would be first to get to a pier, first to tie up, and first to get the crew off to hit the on-base clubs for ice-cold beers. That was a lot of incentive.

The Seattle turned its ponderous bulk toward the entrance. I expected we would be last in, since destroyers are known for and take pride in their high speed. But to hit that speed, their engineers would have to kick in the “super heaters” on their boilers. Only then could they move like the greyhounds they claimed to be.

I was standing next to the captain when he called out to the bridge watch, “All ahead flank.” He turned to me with a smile and said, “Watch this.”

Due to its immense bulk, AOE ships were equipped with giant, battleship-size engines. In fact, the first two in their class were equipped with engines from the battleship USS Kentucky which had been cancelled during construction. That meant the Seattle and her sisters didn’t need to engage any superheaters. She could hit flank speed — 30 knots – in very few minutes.

So, the race was on. The destroyers wallowed for several minutes, while their engineers fired up the “super heaters.” Only then would they be able to hit their legendary speeds.

Meanwhile the 800-foot-long Seattle, already at flank speed and riding high, without her usual load of “beans, bullets and oil,” roared away from them all. Since we got to the entrance first, the trailing destroyers had to wait. The behemoth had bested the “little boys.”

As we led the procession into the bay, the captain didn’t say anything. He casually looked aft for a few seconds, then forward again. A true mariner sporting what we in the Navy called “A Shit-Eating Grin.”