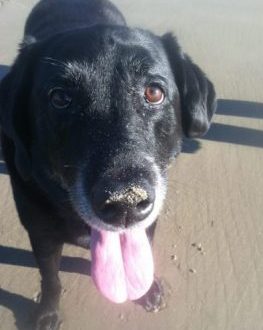 By Dan Haag
Lilo, my exuberant canine companion, was developing a limp.
Though it was becoming increasingly pronounced, I wasn’t initially all that worried. She is, after all, a giant Black Labrador and is often prone to fits of running, jumping, swimming and all manner of doggie shenanigans. At the advanced age of 12, she also suffers from arthritis, something that has slowed her down more and more during the past year. I was sure that a mixture of rest and medication would do the trick.
But the limp got worse. It got to the point where she couldn’t put any pressure on the offending leg and I began carrying her up and down our stairs. Walking was soon off the menu as well, which meant driving her to her regular potty stops.

So, despite my building sense of dread, I took her to Nehalem Animal Healing. Being a decorated veteran of dog health issues, I suspected something bad awaited us as the vet tech led Lilo off for an X-Ray. I’d been here before, with other dogs in other vet offices, sitting alone in an examination room while that cold, gnawing sense of awfulness slithered over me.
I wasn’t wrong.
My sweet girl had cancer. Bone cancer, to be exact, a rather nasty ailment that works its way into a dog’s bones like a tree root slowly needling into the foundation of a building. The X-Ray looked like a star burst, with malignant claws digging into Lilo’s leg and upwards toward her lungs.
“I wish I had better news,” the incomparable Dr. Didilake said sincerely. At that moment, I felt more sorry for him than myself. How many times has he had to deliver news like this and what kind of toll must it take?
The next 20 minutes was a blur of Dr. Didlake and his staff explaining to me what to expect next and how best to manage it.
That is the key word right there.
Manage.
Because in the hellish realm that is canine bone cancer, there is no cure. If caught early in younger dogs, amputation is often the route taken. For older dogs, it is not an option, especially when they already suffer from arthritis, like my Lilo.
“The next week or so is about keeping her comfortable and making some good memories,” Dr. Didilake said.
The next week or so.
That’s it.
After 8 years of love and companionship, it boils down to just a number days.
I stood there dumbly, nodding like one of those stupid toy birds that dips its head into a glass of water and out again.
“Uh-huh,” I said eloquently.
“You’re taking this pretty well,” the doctor said.
“Uh-huh,” I agreed, the proverbial deer-caught-in-headlights.
I shuffled off to the car, a duffel bag of pain meds with names I can’t pronounce dragging behind me. Lilo was waiting for me, sitting up, tongue lolling happily, tail thumping the inside of the car door. It was endearing and comical. Numbly, I gave her a cookie, slumped in the seat and turned on the radio. “Ten Years Gone” by Led Zeppelin was playing:
“Changes fill my time, baby, that’s alright with me
In the midst I think of you, and how it used to be.”
I laid my head on the steering wheel and sobbed, knowing I had to carry this news home and repeat it in some sort of coherent manner to my wife.
Lilo came to us when she was five. We adopted her from the Warrenton Animal Shelter after the elderly couple that had raised her could no longer care for her. I hesitated to adopt another dog because I was still stinging from the loss of our previous mutt, Kirby.
But Lilo was a charmer. She brought me a toy, shoved it into my lap and proceeded to roll in the dirt in a circle in front of me until I threw it. She repeated this until I handed my checkbook to the adoption officer and bundled Lilo off to her new home.


Right away, I was taken with her 1,000 watt personality. Her tail was always thumping, her goofy doggie grin always splitting her features like a rainbow. When she was ready to go out in the morning, she’d signal me by jamming her wet nose into my eye while I slept. If the TV was too loud at night, she’d wander into the living room and stand in front of the screen until we turned it down. When it was dinner time, she’d stand in front of the refrigerator and stare.
We went everywhere together and she was our official road trip warrior. She hiked hundreds of miles of trails, swam rivers and streams, and chased some grumpy raccoons out of our camp site.
Lilo was also a bit of a local celebrity and she was a common sight at the Manzanita Visitors Center, trotting out from behind the desk to greet visitors and inspect them for dog treats. We even made a tourism film segment together, hiking up Neahkahnie Mountain with her trotting along happily beside me as the film crew darted around us.
Her constant gentleness and compassion had a soothing effect on me that was genuine. Our world could learn a lot from that kind of unconditional love. It is no stretch to say she made me a better person.
So we enter the pain management stage. She is sleeping a lot, her legs twitching as she runs in her sleep in a way she no longer can in real life. The pain gets a little worse every day. CBD oil helps take the edge off, but it’s a delaying measure.
Now, I’m taking Lilo on a series of short road trips to some of her favorite places: Sisters & Pete’s for a peanut butter cookie, Manzanita City Hall for a dog treat, the drive-thru at Columbia Bank for more dog treats. And I will carry her down to the beach one last time, to lay in the sand, smell the air and watch seagulls float and fly while she chews on a stick.
“You’ll have a lovely guardian angel watching over you,” someone recently told me.
“But she’s doing that job here,” I countered.
Soon, we will make that call and await the knock on our door. We will sit together, Lilo’s head on my lap and I’ll hum “Babe” by Styx (her favorite song). Slowly, her eyelids will droop, her chest will fall and not rise again and our tears will flow.
Will I adopt again? There are so many dogs that need saving, just as Lilo did once upon a time.
I think that time will have to wait.
For now, I’ll just stare at the empty spot in front of the wood stove where Lilo used to lay at night and wonder if I’ll ever be the person she always seemed to think I was.