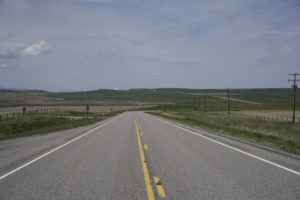 Nothing says road trip like long, empty stretches of highway. Just you, a car, and miles of blacktop. Additionally, nothing says road trip like desperately searching for a place to pull over when nature calls. A full bladder can sidetrack you mercilessly, taking you to hideous roadside places you would normally hurtle past like Wile E. Coyote on an Acme rocket.
Such was the case a few years ago as my wife and I trundled across Idaho towards Yellowstone.
My wife is a master of the inopportune roadside pit stop and when it’s time, the right spot is right now. Ditch, shack, Native American burial ground, or haunted mansion, it makes no difference.