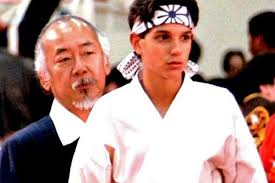 By Dan Haag
35 years ago, one of the greatest films of all time was being viewed across America. I am, of course, referring to the Ralph Macchio classic, “The Karate Kid.”
It was a film that had it all – action, thrills, romance, Elisabeth Shue. Best of all, it delivered what the title promised: karate.
For those of you who have never seen the film and therefore dwell in a dimension where pain and darkness exists, allow me to summarize.