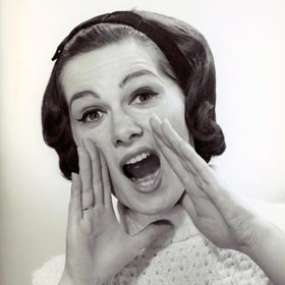 By Dan Haag
On a recent lazy November afternoon, I listlessly pushed a cart through Fred Meyer. How I’d ended up there was a bit of a mystery. I distinctly recalled telling my wife earlier in the day that I had no desire to go shopping and would rather go to the beach. She’d agreed and I’d thought the matter closed until I suddenly found myself in the cosmetics aisle. I could only assume that she’d tranquilized me, loaded me into the car, and brought me here to offer her my wealth of knowledge on such matters as eye liner and blush.
When it comes to shopping, my enthusiasm wanes after I’ve plowed through a store in five minutes, selected the two items I need, and breezed through the check-out lane. It’s like a military operation with every moment planned in advance: get in and get out before they knew you were there.
Now, here I was with no plan and no exit strategy. It was a helpless feeling.

Because my wife was pre-occupied weighing the pros and cons of different varieties of hand lotions, I decided to take a little field trip and see what was happening in other parts of the store. It stood to reason that, despite her repeated threats to do so, she hadn’t yet implanted a tracking chip in me.
So I wandered.
Because it was just a few days after Halloween, the store was decorated for Christmas. Thanksgiving, still a month away, was already a distant memory.
I contented myself with admiring the various colorful displays and lights and found myself settling into that most recognizable of shopping traditions: the lost husband.
You know the look. A man standing alone in a store, hands shoved in pockets, eyes glassy, mouth hanging open. They’re lost, separated from their wives either intentionally or completely by accident. They stop at the nearest open space and congregate until their wives find them. If you happen to need anything from the display they happen to be immobilized in front of, just gently slide them to one side, take what you need, and slide them back in place. As long as it’s not a free food sample, they are quite harmless.
So there I was, hands firmly jammed in pockets, eyes glazing over, mouth drifting open. The lights twinkled, the cosmetics aisle receded into memory and I was content.
Then I heard it, a sudden crash followed immediately by: “Jeremy Michael Anderson!”
It was loud, very loud. Startled, some of the nearby lost husbands darted away in separate directions like frightened deer.
“JEREMY MICHAEL ANDERSON!”
The dreaded three name usage.
Someone was in deep trouble.
I poked my head around the corner of the nearest aisle and took in the scene. A young lad –- presumably the Mr. Anderson in question –= stood over a pile of shattered glass and plastic that had once been a festive ornament arrangement. His eyes were wide as hubcaps as his mother, hands on hips, surveyed the damage.
I recognized the range of emotions on the boy’s face. I’d have been willing to bet he’d never heard all three of his names at once. He slowly considered his options: run, hide, offer up an emphatically lame “it wasn’t me!”
To his credit, he settled on “I’m sorry,” and his mom whisked him away. I silently wished Jeremy Michael Anderson well.
It’s not often we hear all three of our names strung together. In my experience, that particular usage only means trouble for the recipient, as our young Mr. Anderson can now attest.
When I was roughly his age, I got used to hearing my name shouted in such a manner. In fact, I didn’t even need to hear the middle and last name: if someone – my parents, for example – referred to me as “Daniel” I knew I had truly stepped in it.
My friends and I quickly learned to gauge the severity of the trouble we were in by how we were called.
We’d be happily playing in an open pit or abandoned house or construction site –- as kids in the 70’s were wont to do –- and the distant call for would sound.
“Dan!”
I’d look at my buddies and knowingly nod. It was all good, still plenty of time to play with rusty nails or sharpened lengths of rebar.
“Dan! Dinner!”
Mom would add the dinner part as incentive and I’d be slightly intrigued. I also knew I still had at least ten more minutes.
“Dan! Where are you?”
The voice sounded more worried than angry. I could push it another five minutes.
“DANIEL AARON HAAG!!”
She’d yelled all three names in all caps, no less. My time was up. I shook all my friends’ hands and they patted me on the back, acknowledging my bravery and the fact that this might be the last time they ever saw me.
I smiled at the memory, hopeful that Jeremy Michael Anderson accepted the teaching moment he’d just been handed.
I was about to return to my lost husband stance when my phone buzzed with a text.
“WHERE. ARE. YOU??” it read, followed by an angry face emoji. It wasn’t the dreaded three names, but it was close enough.
I turned back for the cosmetic aisle, nodding to the other lost husbands knowingly as I passed.
Their time was close.