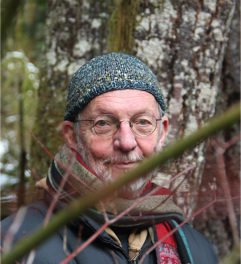 EDITOR’S NOTE: Several weeks ago, Lane deMoll sent me Tom’s obituary for publication. It was when the pandemic started to materialize in our region, and the timing – and so much content, just didn’t seem “right”. About a week ago, she reached out, and I said “There’s a purple post-it that says simply ‘TOM’ stuck on my computer,” and I explained my dilemma about all the information. The “stay home” orders and gathering restrictions are why our community has not been able to hold a celebration of life to honor this icon. On my “favorites” list, and most notably for his costumes at the opening of the Manzanita Farmers Market – tickling the back of necks with a feather, bedecked in lime green with wings and mask … just the thought brings a smile to my face. Since Tom “marched forth” on March 4th, the idea came that April 1st – Fools Day – seemed well-timed to publish this ode to his life. Tom certainly “burst forth” and since we have been experiencing a great shift, I’d like to think his amazing vital energy is driving us toward the great awakening. Sending great virtual hugs to Lane, and Tom’s sons – it was a great honor and privilege to know him as a friend.

Tom was one of a kind. Visionary, trailblazer and trickster, he was passionate about everything from planting trees and saving forests, to energy conservation in beautiful buildings, to sustainable economics of community, including affordable housing. Not to mention more far out things like energy portals, shamanism, and ancient sacred sites around the world. He was one of the first in the US to explore the ancient Chinese art of feng shui, winning a NEA grant to study it in 1973. He is also considered one of the founders of the green architecture and sustainability movements.

He was born to Kathleen and John Bender in Fostoria, Ohio, on September 24, 1941. They and his older sister Susan preceded him in death. He was an Eagle Scout. He began his college studies at Northwestern University (Chicago) in physics but transferred after a year to Miami University (Ohio) to study architecture. His roommate there was his life-long friend Yui Hay Lee. He received his Masters from the University of Pennsylvania studying with Louis Kahn. He spent a year teaching at University of Virginia and then became a tenured Associate Professor at the University of Minnesota, where he created an innovative Environmental Design Program and self-published his first book, The Environmental Design Primer, later re-issued by Schocken Books. He also co-led the Ouroborus Project, a student designed and built “resource-self-reliant house,” a first of its kind.
Tom met Lane deMoll in 1971 and in 1974 they drove across the country to work in Oregon Governor Tom McCall’s Office of Energy Research and Planning. Publications from that era were the groundbreaking Living Lightly, Cosmic Economics, and Sharing Smaller Pies. For several years after that he & Lane were part of a team of editors of Portland’s Rain Magazine – sharing early information about alternative sources of energy and energy conservation.


In 1976 Tom and Lane bought property on Neahkahnie Mountain on the Oregon Coast and built their home – twice because it burned down as they were moving in the first time. That experience is chronicled in his What is to Give Light Must Endure Burning. First son Skye was born in 1979 and second son Morgan in 1982. Tom was involved in founding many community projects and designed houses locally as well as all over the Pacific Northwest. His most notable buildings in the local community include the Manzanita Library, Cannon Beach Chamber of Commerce, Seaside Head Start, Saint Catherine’s Episcopal Church (known for its marvelous acoustics) and Columbia Bank for which he won Top 10 Green Buildings (2002) from the American Institute of Architects. His other awards included California Affordable Housing Award (1981), Sustainable Community Solutions International Competition from the AIA & International Union of Architects, (1993), National Award for Sustainable Design (2001). He was the author of numerous articles and books, several video/dvd’s, and spoke at conferences all over the US. Some of his written works can be found on his website: tombender.org and some are for sale locally. For years he and photographer Gary Braasch put together a calendar published by Amber Lotus.
Besides his sons and his former wife, Tom is survived by his two granddaughters, Ziora and Chetaora and his daughter-in-law, Nkeiruka Oruche. He died in his home on Neahkahnie Mountain with his sons by his side on March 4,2020. He voiced to a friend that as he left his body he “wanted to burst through the energy field and change the world.”
Donations in his name can be made to organizations he was involved in or passionate about: Lower Nehalem Community Trust (a founding board member), North Coast Land Conservancy, Fire Mountain School (a founding parent), and Fulcrum Community Resources (a founding board member).