Three sections of the north coast trail system in Tillamook County will remain closed until at least spring 2023 while crews remove dangerous trees left from the September 2020 windstorm. A trail at Cape Lookout State Park and two sections of trails at Oswald West State Park are impassable due to downed trees and will require extensive work to reopen, Oregon Parks and Recreation Department (OPRD) announces.

OPRD is working with FEMA and other federal partners, Oregon Department of Forestry, private consultants, South Fork Forest Camp and volunteers to map the damage and plan for a safe reopening.

“We want to thank visitors for their patience as we work as quickly as possible to reopen these historic and culturally important trails,” said North Coast District Manager Justin Parker. “In the meantime, we encourage visitors to explore one of the many open trails along the north coast.”

The following trail segments are closed: 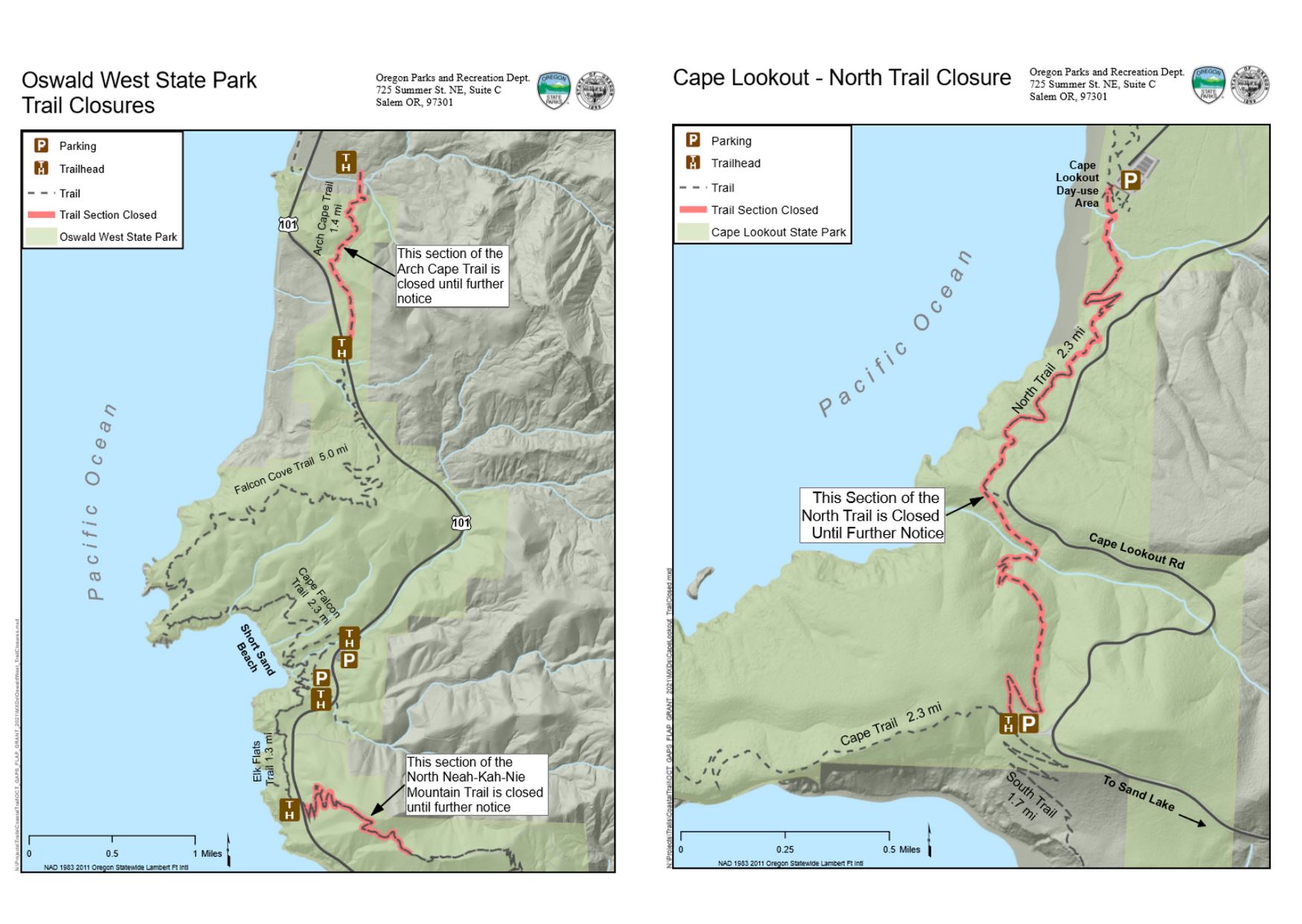 These trail segments have been closed since Labor Day 2020, when the same winds that fueled wildfires in other parts of the state caused extensive blowdown on about 185 acres within Oswald West and Cape Lookout state parks. An especially wet and stormy fall and winter followed, knocking down more trees already weakened from the windstorm and weakening others. In the hardest hit areas, up to 90 percent of the trees — made up of hemlock, Douglas-fir and giant Sitka spruce as tall as 140’ — are down or in danger of falling.

Repairing trails and restoring the landscape will require selectively removing fallen and dangerous trees by helicopter within 200’ on either side of the trail — a total of 67 acres. Where possible, OPRD will leave downed trees to provide habitat. With helicopter crews committed to wildfire cleanup elsewhere in the state, this winter is the soonest OPRD could begin the work.

Once trails are clear, ground crews can safely enter the area to assess damage and rebuild trails, a process that’s expected to take a year.

“We are focused on keeping workers and visitors safe, while being good stewards of this public land,” Parker said. “We don’t want to rush the process, knowing that decisions we make today will affect how the forest looks for hundreds of years.”

The closed sections are all part of the Oregon Coast Trail that stretches along the 362-mile coastline. Many other trails on the north coast are open — information on trails managed by OPRD is at stateparks.oregon.gov.