Residents of Tierra Del Mar are monitoring the construction site of Facebook’s data cable project. Facebook is using a beachfront lot to conduct industrial-level undersea drilling for a transoceanic data cable. Residents opposed the project as being inappropriate for a high density neighborhood. But, County Commissioners Bill Baertlein and David Yamamoto granted Facebook a permit to drill.

The issue is under review by Oregon’s Land Use Board of Appeal (LUBA), but Facebook has already cleared and leveled the site and has begun to locate the heavy equipment needed for the drilling project. Residents are documenting the impact by taking notes as well as making a photo and video record of the impact of this project on the small community. 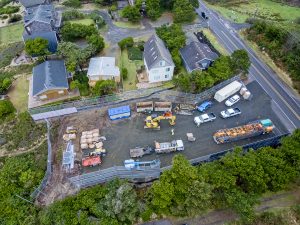 “We’re left with little else to do right now, but to maintain a record of what happens here,” said Ed Ruttledge, a resident of Tierra Del Mar. “One of the problems we had in the permitting process was there was no good example of the problem – this was the first of its kind drilling project on a small lot inside of a high density neighborhood. So, we’re going to document this for the next time this issue comes up along Oregon’s shoreline.”

Ruttledge encourages Tillamook County citizens to drive by the site and see it for themselves. “In supporting Facebook, Commissioner Yamamoto kept saying this was the same as a construction site of a new house. People should take a look at it and decide for themselves if Commissioner Yamamoto had any idea what he was approving,” concluded Ruttledge.