By Matt Maizel
After a slow 0-2 start to the season, the Cheesemakers football squad (4-0 Cowapa League, 6-2 overall) have won their last six games in a row, including a thriller last Friday night against league foe the Scappoose Indians (3-1 Cowapa League, 6-2 overall) to capture their first league
title in over 20 years.
A quick opening drive touchdown for Scappoose on a short rush put the Indians up early – 7-0. Tillamook was in good position to score on their first drive of the game, too, but a fumble on the handoff was scooped up by Scappoose to give the Indians possession on their own 32 yard line.
Scappoose decided to go for it on 4th and short on their side of the field, and the Mooks’ defense made them pay by stuffing the run to take over in opponents’ territory. Tillamook couldn’t handle the snap on 4th down in the wet conditions, turning the ball back over to the Indians. 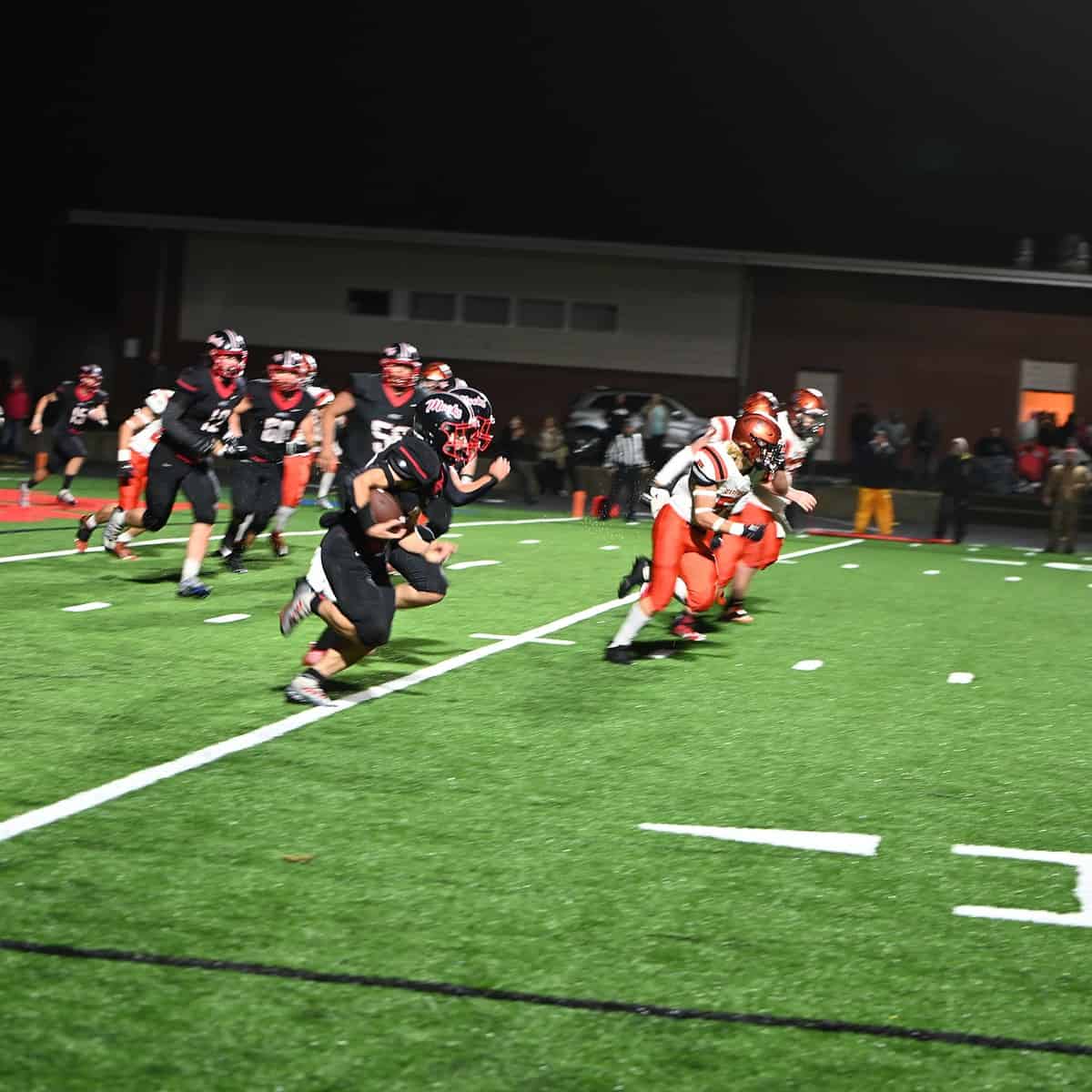 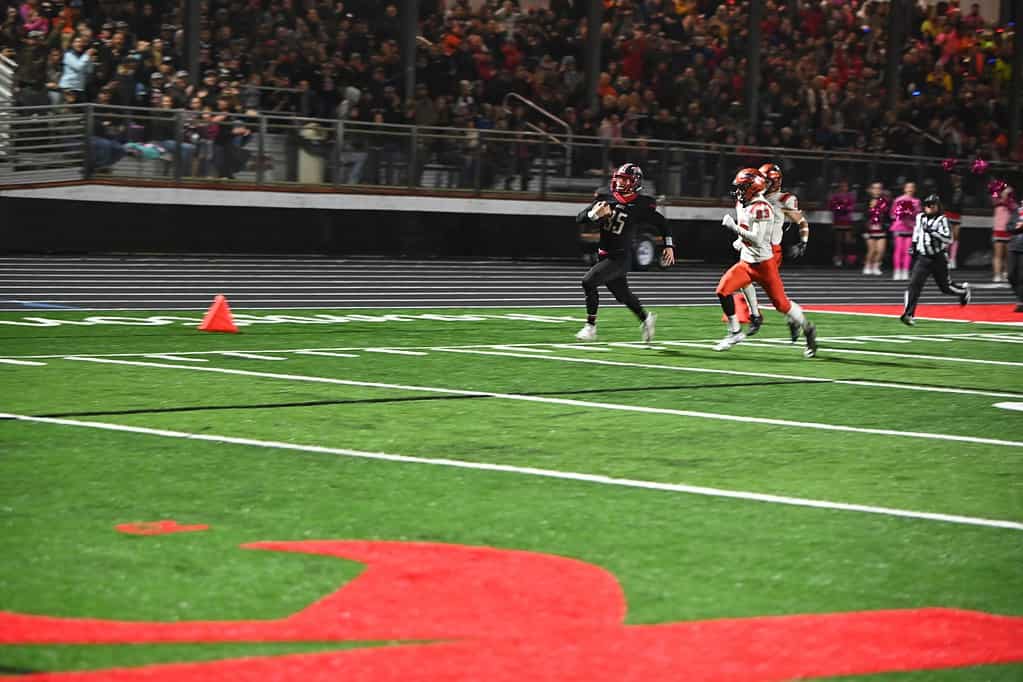 Foreshadowing what would be a long night for Scappoose’s special teams, the punting unit was only able to muster a punt with a net of 7 yards to give the Mooks good field position at midfield. Moments later, Senior running back Judah Werner was able to find room on the edge to bust open a 41 yard touchdown run to knot the score – 7-7. After a promising drive that saw Scappoose drive down the field, defensive back Parker McKibbin intercepted the goal line pass and returned it to the 50 yard line on a big momentum shifting play.
Later in the second quarter, the Mooks recovered a muffed snap by Scappoose’s punter to take over on the Indians’ side of the field. Scappoose’s defense then made a big play with a diving interception, as the back-and-forth would continue for these two evenly matched teams. The Cheesemakers would get the ball back with 1:31 left in the half, but the Indians’ pesky defense was able to spoil any chance at a Tillamook score before halftime, as they would force another fumble and recover the loose football. At the end of the first half, the score was still tied 7-7.
The Indians found the endzone on their next possession with a short pass up the middle of the Cheesemakers’ defense to grab the lead – 7-14. A controversial pass interference call extended Scappoose’s next drive, but the Mooks held strong and forced Scappoose’s punting unit onto the field once again. Scappoose’s special team woes would continue – as the punt only traveled a few yards beyond the line of scrimmage, giving Tillamook another short field to work with.
Scappoose’s defense continued to give the Mooks issues, and a costly holding penalty would ruin Tillamook’s opportunity at tying up the game before the third came to a close.
The Cheesemakers finally found a spark on offense, as senior wide receiver Zeyon Hurliman made a crucial catch on 4th down. Senior wide receiver Tyler Moncrief capped off the drive with a 4 yard touchdown direct snap to make things interesting – 14-14. With time expiring,
Scappoose was able to find some much needed offense themselves, with their quarterback accurately hitting close targets, not over-throwing his receivers far down the field like he had previously because of the wind, and getting close to field goal range to attempt a game winning kick. The wind may have played a part as the kick was pushed wide – the Indians missed the game winning field goal and at the end of regulation with the score still tied – we were headed to overtime.
Each team would get a possession from their opponents’ 25 yard line and the team with the most points wins in high school overtime rules – with a tie going into another overtime. Scappoose striked through the air quickly, and Tillamook found themselves in a 4th and goal situation. With the pressure on, Tillamook’s defense made one last pivotal stop with their backs against the wall, and the Mooks dynamic offense would get a chance to put this one away. It was 4th down from around the 30 yard line after a slow three downs, and Coach Johnson decided to send out the special teams with quarterback/kicker Tanner Hoskins to nail the 47 yard kick, sending the stadium into a craze while sealing the victory.
The ribbon-cutting ceremony for Tillamook High School’s newly renovated field will take place before the Cheesemakers’ next and final regular season matchup against Milwaukie/Milwaukie Acad. of the Arts @ home next Friday; see you there! 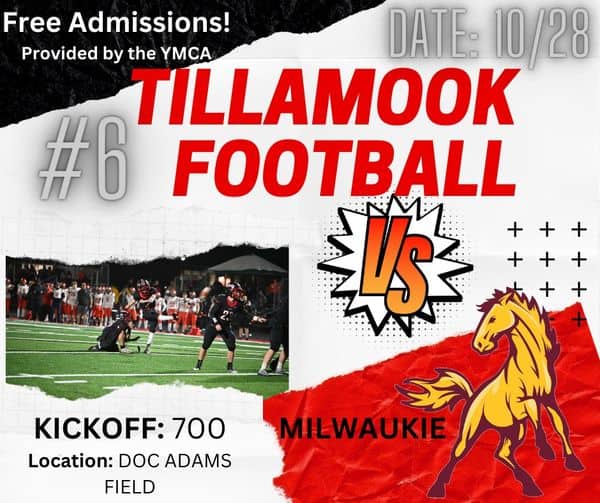