EDITOR’S NOTE:  Second time’s the charm … at a historic time for the community of Oceanside as they celebrate 100 years, and with the final formality at today’s August 3rd Tillamook County Board of Commissioners meeting that approved the petition for the incorporation of the city of Oceanside. The people of Oceanside will vote to become a city on November 8th. Historic in many ways, as there have only been three attempts in the last century to establish a new city in Oregon. Here are details from Oceansiders United.

At the hearing on July 28, 2022, the Tillamook County Board of Commissioners unanimously approved Oceansiders United’s petition to allow Oceanside residents an opportunity to vote on incorporation in the November 8, 2022, General Election. The decision came after the Commissioners first voted to exclude The Capes from the proposed city based on evidence that it would not benefit from incorporation. The Commissioners declined requests for exclusion by residents of other areas, such Radar Road, Avalon West and Terrasea, citing what they deemed to be critical legal distinctions between them and The Capes.

Here is what the proposed city would look like: 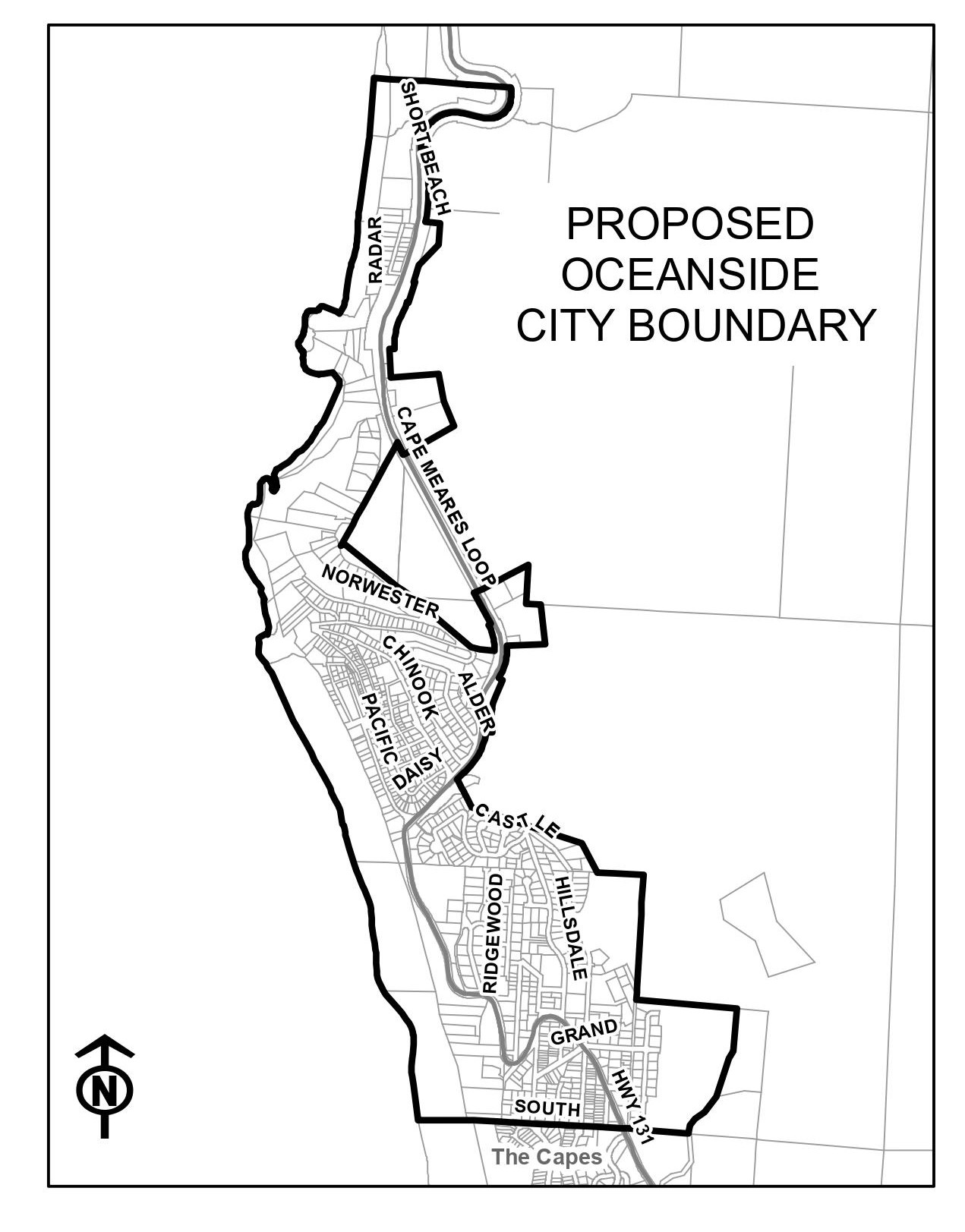 County staff will now prepare the necessary Board Order and accompanying documents for signatures at the Board’s August 3, 2022, meeting.

Over the course of three hearings, the Commissioners received input from county officials who reviewed and validated various aspects of Oceansiders United’s Economic Feasibility Analysis.  In public comments, opponents focused primarily on arguments that a city government was neither feasible nor necessary and would not be worth paying the proposed city tax, which is permanently capped at 80 cents per $1000 of assessed value.  In turn, petitioners and supporters argued that while the new city tax would raise about $200,000 a year, the new city would benefit by retaining an additional $600,000 per year from short term rental taxes and fees for local road improvements, facilities, visitor management measures, locally controlled land use planning decisions and city administration.  All of the oral and written testimony is available on the County Community Development website at 851-22-000224-PLNG | Tillamook County OR

After the hearing, Jerry Keene of Oceansiders United stated, “The whole point of this effort has been to give Oceansiders the chance to choose their future – whether that means forming its own city government or continuing to rely on county staff and resources.  Either way, we’re excited that our community be able to make an informed choice.”

The decision caps a year-long initiative by Oceansiders United and the Oceanside Neighborhood Association to educate the community about the benefits and costs of forming a municipal government.  At an online meeting attended by 200 Oceansiders last December, ONA members voted by a 60%-40% margin to accept the ONA’s Incorporation Task Force Report and to formally endorse the incorporation initiative. After unsuccessfully pursuing a petition with the Commissioners earlier this year, Oceansiders United gathered the required signatures for a second petition and focused its presentation on economic feasibility issues questioned by the Commissioners in the previous round of hearings. To actually form a new city, the measure must now be approved by a majority of registered Oceanside voters who cast ballots in the November 8 election.

Oceansiders United will continue its outreach efforts on the initiative between now and the election.  The Lead Petitioners are Sharon Brown, Jerry Keene and Blake Marvis.  They may be contacted at oceansidersunited@gmail.com with further information available at the “Oceansiders United” Facebook page.