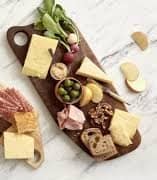 NMPF brings together dairy producers and cooperatives to participate in public-policy discussions to promote the economic well-being of dairy producers. As part of the annual NMPF cheese competition, TCCA received:

“It’s always exciting to have our hard work recognized, and we are thrilled with the honors from these two prestigious and highly respected groups,” said Jill Allen, Director of Product Excellence, TCCA. “At TCCA, we pride ourselves on being good stewards of the land, using quality ingredients, and never cutting corners. Our products taste better because they’re made right.”

Learn more about TCCA’s commitment to doing right by every bite, here. Tillamook products are available at major retailers nationwide. Find products at a store near you at tillamook.com/where-to-buy.

About Tillamook County Creamery Association
Founded in 1909 as a farmer-owned cooperative, Tillamook County Creamery Association (TCCA) recently achieved the distinction as a Certified B Corporation® (B Corp™) and prides itself on its commitment to bringing to market the most consistent, best tasting, highest quality dairy products made in the most natural way possible. Guided by the belief that everyone deserves real food that makes them feel good every day, Tillamook® produces internationally recognized, award-winning cheese as well as exceptional ice cream, butter, cream cheese spreads, yogurt, and sour cream, made with unwavering values that never sacrifice or compromise quality for profit. TCCA is owned by a group of farming families, primarily based in Tillamook County, Oregon. TCCA operates production facilities in Tillamook and Boardman, Oregon and employs more than 900 people throughout the state. The Tillamook Creamery is the largest tourist attraction on the coast of Oregon and one of the most popular in the state, attracting more than one million visitors each year. For more information on TCCA and Tillamook, visit Tillamook.com.