By Gordon McCraw, for Tillamook County Emergency Management
Monday, February 28, 2022, 11:30am
Currently the area has seen between 1” and 1 3/4” of rain along the coast in the last 24 hours and between 3” and 5” in the Coast Range and that is pushing the rivers up and has increased the expected area river crests. The increased levels all remain below Flood Stage, but the Nehalem, Trask and Wilson Rivers do get up into Action Stage and near Flood Stage later tonight into early tomorrow morning. These will need to be monitored closely for any forecast changes that would impact the flow rates. We are also seeing some gusty southwesterly winds, gusting to 35-45 at the airport and down along the beaches and I am seeing a gust to 61 in Lincoln City.

(UPDATE – 2 pm) – The atmospheric river is shifting northward but not before pushing the rivers up close to or above Flood Stage. The rivers should be cresting as soon as the higher flow rates in the Coast Range make it down in the next hour or so. I do see the increases slowing which is the first indicator it will be cresting soon. As you can see, the Wilson River is right at Flood Stage as of 12:30PM and the Nehalem River is forecasted to get near Flood Stage this afternoon also. Between this and the Coastal Flood Advisory, I would expect water to pool in the right hand lanes of Hwy101/North Main areas, especially on the south end near Papa Murphy’s and The Fern. The Trask and Nestucca Rivers appear to remain well below even Action Stage. 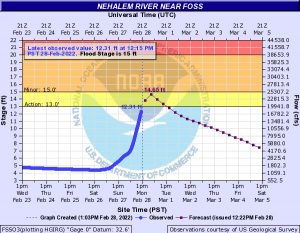 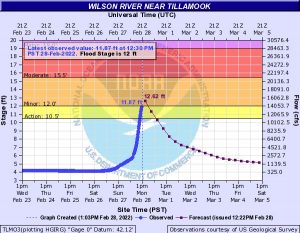 There is currently a Flood Watch until tomorrow at 6PM, a High Wind Warning until 4PM today and just issued was a Coastal Flood Advisory until 6PM this evening. The Coastal Flood Watch is a result of some astronomically high tides today, add about a foot anomaly due to the wind and high seas, then factor in the elevated river levels because of the moderate to heavy rain, and you see Coast Flooding including the usual areas like downtown Nehalem, Fraser Rd west of Tillamook and Resort Dr in Pacific City.
So, the atmospheric river extends from the Oregon/Washington coast southwestwards into the Pacific. The rain shield extends from Florence northward to Victoria BC. There are imbedded heavier rain clusters moving northeastward in the flow. The models suggest the area will shift a little northward later today, bringing light to moderate rain and then giving us a break tonight by further easing the rainfall rates into tomorrow morning as the area shifts south and eastward. The models also show the rain increasing again tomorrow afternoon affecting the central Oregon coast and Coast Range more.
An upper level trough of low pressure will drop south to the northwest Wednesday and this helps to finally push the zone eastward out of the area Wednesday night. The trough does cause the atmosphere to become a little more unstable, so we see some scattered showers Thursday into Friday as the trough continues southward into northern California and southern Oregon. There is some model disagreement on exactly where this trough makes landfall then a ridge of high pressure settles into the eastern Pacific which puts us under a cooler northwesterly flow for the weekend that would pull the snow level down into the higher Coast Range mountains once again with nighttime lows temperatures in town back down into the mid and upper 30s while the passes could drop to the low 30s, something else to watch. Winter continues, at least until March 20!