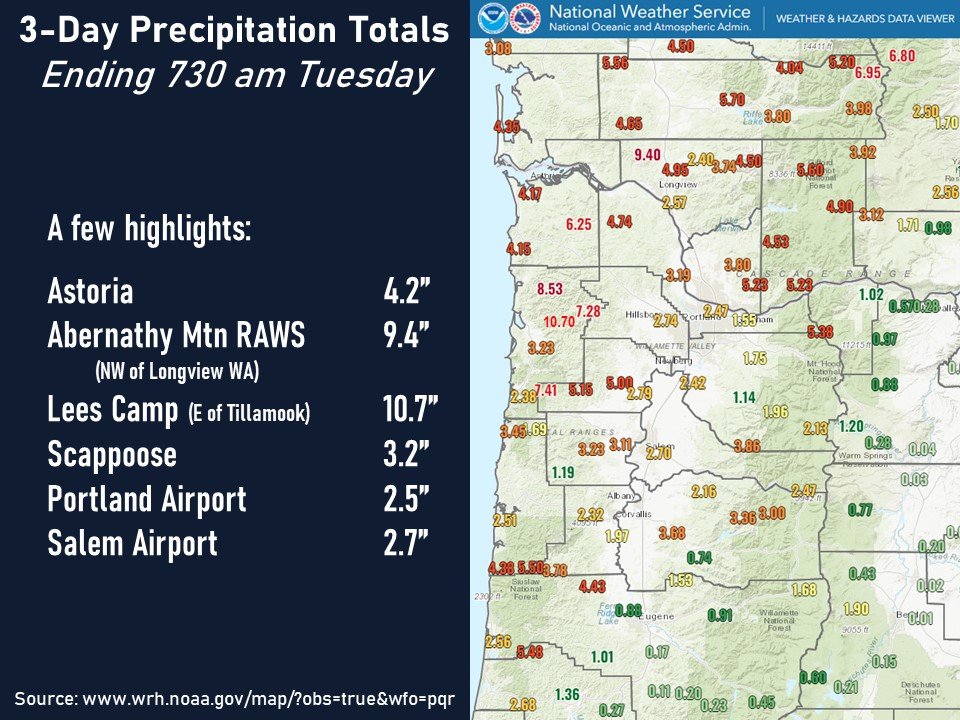 Well, we are still under a Flood Watch until 6PM tonight.  We also have a Coastal Flood Advisory from 10AM thru 2PM. This is the result of some Astronomical High Tides with a positive 1’ anomaly on top of that, in other word, the tide will be 1 food above the projected/forecasted high tide.  Throw in the swollen rivers from all the rain and you get some Tidal Overflow Flooding in the usual places. From Nehalem, thru Tillamook and even down in Pacific City. 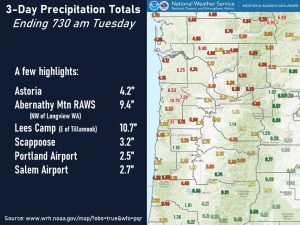 And just how much rain did we get?  Well, Astoria recorded 4.2’ for the three-day event ending this morning.  Lee’s Camp had a whopping 10.7”.  The Tillamook area saw just over 2-3” of rain for that period. It looks like to me that Lee’s Camp will be the rainfall winner in the state for this event, again!

So, the atmosphere river event is weakening and has lost a lot of its moisture, so we are just seeing spotty light to moderate rain now.  The line is expected to drift further south today so the river flooding focus will shift to central and southern Oregon. The winds have also dies down and should stay below 10mph today and tomorrow.  Rainfall totals will be less than 1/2“total thru tomorrow night.

The system will finally push off to the southeast by Friday so we get a break Friday into Saturday when we start watching a low-pressure area that will develop off to the northwest then drop down along the coast before moving into northern California.  If it stays well offshore as it passes, we will be dry, the closer it passes the wetter and breezier we become.  The models currently keep it well offshore, so the weekend is now looking dryer.

Lastly, I am getting questions on why we are sending out so many Alerts on the flooding. The answer is simple really. First, all National Weather Service (NWS) Alerts are automatically push into and out of the Nixle Alert System. This includes all Advisories, Watches and Warnings. I do have the Watches and Advisories throttled between around 11PM and 6AM but the Warnings get pushed out 24/7. This way I do not have to sit by the computer and when something comes out, copy and paste so you see it, you actually get it as soon as it is issued.

Next, regarding the Flood Warnings yesterday and today. Again, when the National Weather Service pushes out a Warning, it gets automatically sent thru Nixle. The frequency has to do with several factors. As conditions change, the NWS alters the Warning because of changes and then transmits the new Warning with the updated info. Tillamook County has 4 Rivers that could be potentially flooding. In yesterday and today’s rain and flooding event, The Wilson and Nehalem River exceeded Flood Stage, so, you were getting the frequent changes on two different rivers. While the river flooding may not have impacted you personally, this information was needed by those individuals that work or live in the impact areas. It is impossible for us to separate those that need/want the info from those who don’t.

In my humble opinion, it is better to get to many warnings, than none or to few, especially during Mother Nature’s angry moments.