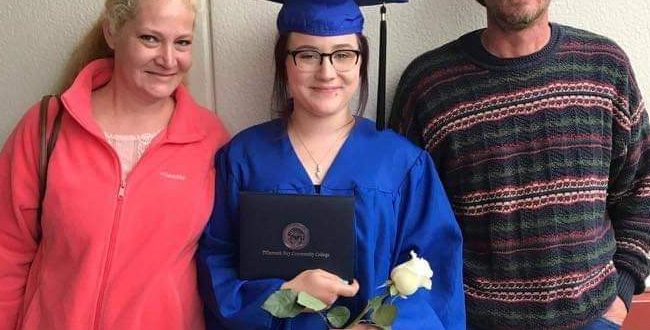 What’s the story behind the “Tillamook County for Rent” Facebook group? We went behind-the-scenes to find the person who is shining a spotlight on the heart-wrenching stories of a lopsided housing market. While the page’s creator, Trinity McClure, has helped dozens of people find housing, she has not been so lucky.

For most of the 7 years they have lived in Tillamook County, Trinity’s family of five has been homeless, living in tents, hotels and even an uninhabited home. She and her husband, along with their son and daughter, daughter’s boyfriend and family pets have struggled to stay housed since a cancer diagnosis disrupted Trinity’s ability to work eight years ago.

Since recovering from colon cancer, Trinity has had steady work as a manager of a local retail store, something she managed to do despite the inconveniences of being homeless. “It’s not fun trying to go to work when you wake up with your bed soaking wet from the rain blowing in your tent or can’t take a shower.”

Lack of rental listings, along with dead-end leads and scams led Trinity to create the Tillamook County for Rent Facebook page. “There are all these other groups on Facebook so I thought, ‘Why not create one that connects landlords with people who are looking to rent?’” And the page has exploded with interest, but mostly from people looking. She notes that some landlords do monitor the page and reach out to people privately and that tensions can run high on the page with so much competition for so few options. Trinity’s family even found their “dream house” through the Facebook page but could no longer afford it when her husband’s health affected his ability to work. Like many others, the family was in a catch-22. With their combined incomes, they make too much for low-income housing but not enough to afford market rate rent.

When asked if they are in a house now, her response is guarded, noting they have not had access to water for months. Acknowledging that hers is a “super unusual story,” Trinity relates how, through persistence and resourcefulness, they do have a roof over their head; at least for now.

Trinity’s family lived with friends when they first moved to North Tillamook County. A short time after their friends moved, Trinity’s family had to find other accommodations, leaving the house empty. Over the next 2 ½ years, Trinity turned over every stone to find housing. Considering that the house they had stayed in before was now vacant, she decided to research and contact the owner to see if they might be able to return to it. Trinity went to the tax assessor’s website and, after more than two years of internet research, was finally able to connect with the owner. Everything went well initially. The owner was supportive and willing to work with them if they fixed up the house. They removed a large garbage dumpster of debris (and worse), painted inside, put in a new woodstove, and paid for repairs to the electric panel to get the power restored.

Then, in February, the water was shut off. It was at this point they lost contact with the owner. With a bit more sleuthing, they discovered the owner was in legal trouble. They have been permitted to stay in the home but they cannot get the water turned back on without the owner’s permission, which he has not granted.

Despite these struggles, Trinity remains committed to helping others in similar circumstances. She is always on the lookout for “Zombie” houses and goes to great lengths to search for the owners. Putting things into perspective, Trinity says, “Everything great starts with something small. A rental doesn’t have to be perfect for someone to move into it. For a lot of people, a condemned house is better than nothing at all.”

Speaking more broadly about the housing crisis, Trinity says she sees the issue from all sides, including the needs and interests of landlords and vacation homeowners, but is especially concerned about large companies coming into communities and buying up housing stock for vacation rentals. “It’s not okay – It makes it hard for me to hire people at the store because there’s no housing.”

Trinity sees and hears the perception that people are homeless because they are on drugs or don’t want to work. She wants people to know this is not true for most people in need of housing. She says, “I work 45-50 hours/week, six days a week. It’s not that people don’t want to work. Sometimes they just can’t. When I got colon cancer 8 years ago, I had to stop working.  Anyone can be in this situation. It just takes one accident or illness for this to become someone’s reality.”

When asked if she has considered moving, Trinity is resolved, “I love Oregon and I am going to stay here and keep fighting for this. People need a place to live to work.”

This story is brought to you by the Tillamook County Housing Commission’s outreach effort to increase workforce housing in Tillamook County. For more housing stories and information, visit www.co.tillamook.or.us/bc-hc.

Do you have a housing story or ideas to share? Email us at TillamookCoHousingCommission@gmail.com