By Matt Maizel
An updated Housing Needs Analysis has been completed by Tillamook County’s Housing Commission, findings were presented to the Board of Commissioners and now the Commission is developing a strategic plan and considering solutions. According to the report, new housing production has not nearly kept up with the demand generated by permanent residents and seasonal homeowners. Jake Davis, Tillamook County’s newly hired Housing Coordinator provided deeper insight into this phenomenon. Davis, a recent graduate from Portland State University (Masters in Urban and Regional Planning) has been working with Tillamook County’s Housing Commission since October 2019, said “We need to enable more housing options across a bigger range of incomes to ensure people have choice and mobility when it comes to where they live.” Vacancy rates have plunged to near zero, while rental and housing prices have increased to record levels. In Tillamook County, it is estimated that median home prices have increased by over 40% between 2014 and 2019. During this same time frame, median household income levels in Tillamook County increased only 21%; thereby creating a major housing affordability challenge.

The findings indicate that Tillamook County will need 2,603 housing units in the next 20 years, about 1,800 for ownership and 800 for rentals (that’s 130 units per year; currently less than half this number of units is being built.) This assumes that 50% of new construction will be seasonal housing, or short-term rentals and second homes, while the other 50% will be long-term housing. “The current ratio is more 75% seasonal, 25% long-term, so this requires a significant change in the types of developments currently being built,” added Davis. Tillamook County has the second-highest percentage in Oregon of income-constrained households, or households which are essentially living paycheck-to-paycheck.
Some of the short-term recommended actions include: identifying publicly-owned properties that could be developed for various types of housing; considering a tax abatement program to promote the development of affordable housing; and encouraging upper-level redevelopment and conversions in higher-density populated areas through financial assistant programs. Some of the long-term action plans involve expanding Tillamook’s urban growth boundary and local sewer and water districts, which would result in housing development opportunities. 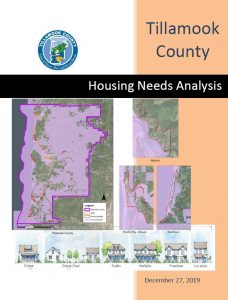 The full Housing Needs Analysis can be found on the HERE.
The Tillamook County Housing Commission meets on the first Thursday of each month at 9:30 am at the Port of Tillamook Bay Conference Center, 4000 Blimp Boulevard, Tillamook, OR. Meetings are open to the public. For more information, go to https://www.co.tillamook.or.us/gov/ComDev/HousingCommission/housing.htm