James “Stu” Maxwell and Clarice Maxwell understood the vital role of the library in a free and democratic society and in the overall health and vitality of the community. They gave freely of their time and talents to both the main Tillamook County Library building in Tillamook and the Winkleman Library in Pacific City. They were generous in their financial donations. They were farsighted in their vision of the accessories that can link a library to its community. In honor of and appreciation for all that Stu and Clarice accomplished for the Tillamook County Library System, the Tillamook County Library Foundation, at its December 2019 board meeting, voted unanimously to name the park under construction adjacent to the main library building Maxwell Library Park.

With the Winkleman Library up and running, Stu and Clarice turned to the Main Library building in the City of Tillamook. Housed since 1963 in a converted auto dealership built in 1949, the Main Library building was short on space for materials, programs, and the materials processing done by staff for each of the county’s five branches and bookmobile. It was also short on space for the increased patron demand for emerging technologies, including computers for Internet use.
Planning for the new Main Library began in 1996. The Tillamook County Library Foundation became the non-profit fundraiser and conduit for donations. That year Clarice attended the Public Library Association (PLA) Conference with Library Director Sara Charlton to look for an architect. They found Richard Turi.
Meanwhile, Stu was looking for property close to city center on which to build. When he found out that the Copeland Lumber property on the corner of Third and Stillwell was for sale, he called Sara and gave her a number to call. The number turned out to belong to the president of Copeland Lumber. A deal was eventually reached that allowed the County to purchase the property in 2000.
Financing for the bulk of the construction expenses came through a bond in 2002. To place the bond issue on the ballot, a total of 800 voter signatures was required. Stu worked with the committee to get 1000. The bond passed. Construction began in May 2005. The new building opened in 2006. There, on the Third Street side of the building, were three magnificent Japanese maples, gifts from Stu and Clarice. The most westerly maple has since been moved and will now greet people as they enter Maxwell Library Park.
When the new building opened, so did the Library Bookstore. Throughout the planning process, Clarice worked closely with Architect Richard Turi to be sure that there was room for a bookstore within the new building. On opening day, the bookstore was stocked with books from Stu and Clarice’s own collection and with donations from their friends. The bookstore that Clarice worked so hard to establish is still running strong. Volunteers manage the bookstore for the Tillamook County Library Foundation. Current stock comes from donations and library system discards. The bookstore contributes approximately $400 per month towards Library Foundation projects and operating expenses.
Even as the new Main Library was launched, Clarice was already looking ahead. She had her eye on the property adjacent to the west side of the building. Clarice wanted a library park, the finishing touch to Tillamook County’s embrace of the library as an essential institution. Stu and Clarice died within three weeks of each other in the spring of 2014, before the library park came anywhere near being a reality. However, their generous philanthropy to Tillamook County continued in death as they left over $130,000 to the Library Foundation’s endowment fund.
This gift was the impetus that spurred the Foundation to purchase the park lot when the owners offered it in the fall of 2014. Richard Turi, the same architect found by Clarice at the PLA conference who designed the main library building, was hired to design the park. He held public meetings throughout the county in early 2017. The Library Park design was created based on citizen input. 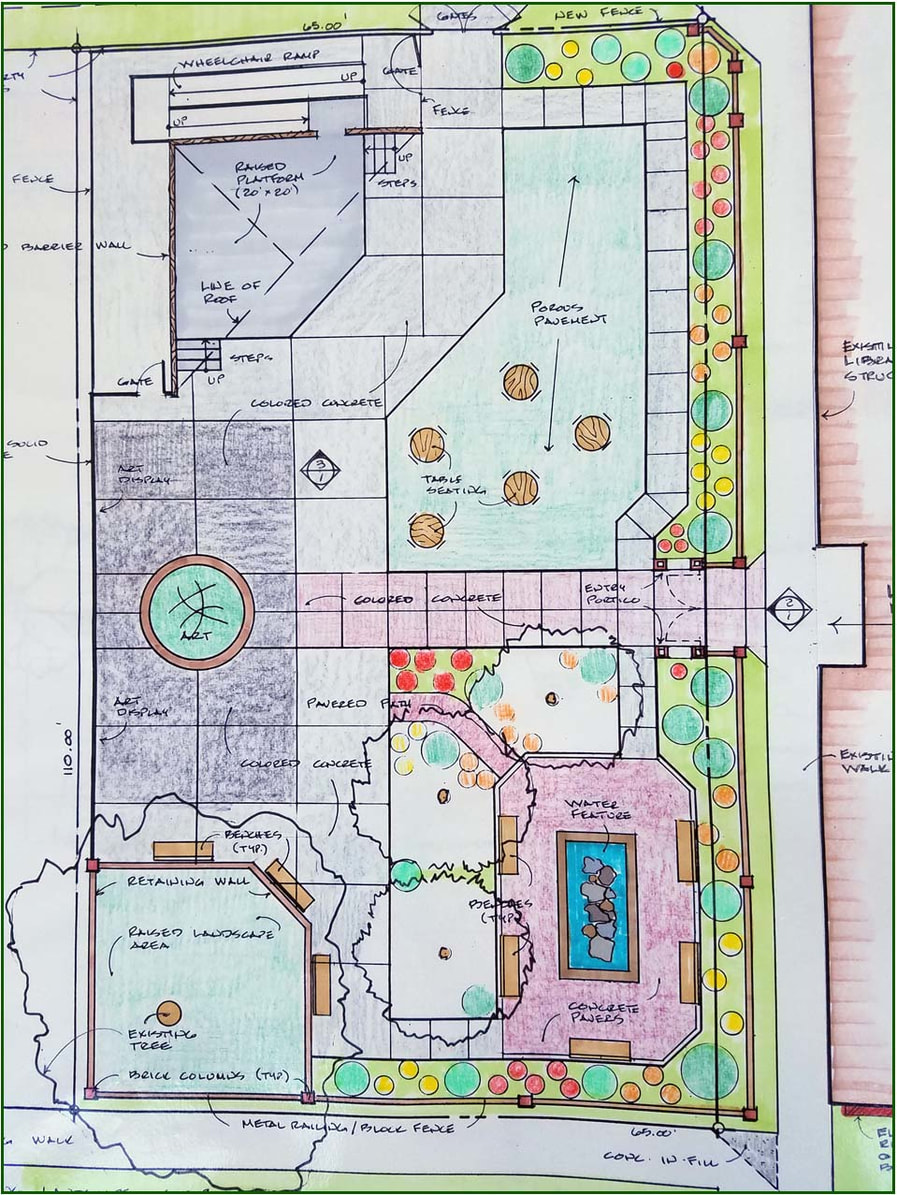