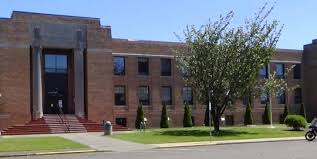 TILLAMOOK – On Monday, January 4, 2021, Sheriff-Elect, Josh Brown, joined other winning candidates of Tillamook County’s May, 2020 primary, and November, 2020, general elections in being sworn-in to their respective positions by Circuit Court Judge, Mari Trevino. Incidentally, Judge Trevino won her own re-election bid to the bench in the May, 2020 primary election. The proceedings took place in Courtroom 102 following recommended Covid-19 precautions. 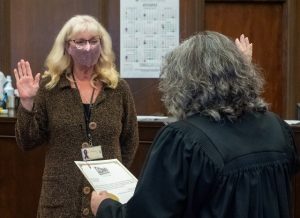 For some of the participants, it was not a new experience. First to be sworn in was County Assessor, Denise Vandecoevering. Vandecoevering has been a county employee for nearly 21 years, and this represents her 4th time being sworn-in as County Assessor. Vandecoevering was appointed Assessor in 2011 and was then successfully elected three times. Next up, was County Clerk, Tassi O’Neil. This represents O’Neil’s 6th term as Tillamook County Clerk. However, O’Neil has worked for the county for more than 30 years. 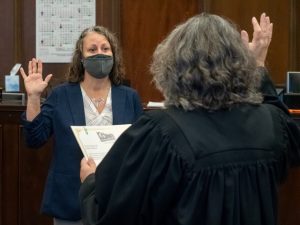 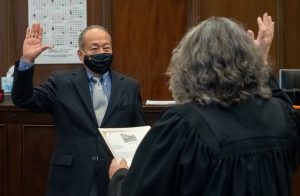 County Commissioner, David Yamamoto, was sworn-in by Judge Trevino for his second term as County Commission Position No.2 after winning his reelection in the November, 2020, general election. 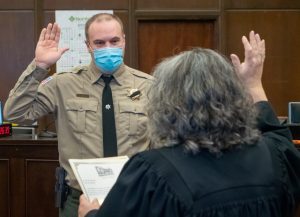 “It was an honor to watch those before me take their oath of office and I am proud to begin my term as the Sheriff for Tillamook County. The Tillamook County Sheriff’s Office has proudly served the citizens of this county for one hundred and sixty-seven years, and it will be my mission to continue and expand that commitment to all of the residents of Tillamook County. I am also excited for our strong positive forward momentum that will benefit the incredible employees we have at the Sheriff’s Office, and also the public,” said Sheriff Brown.
The swearing-in ceremonies can be viewed at tctvonline.com.