One of our own, Deputy Dennis Greiner, was recognized by the Oregon State Marine Board with a Life Saving Award. “This award recognizes personnel who have exhibited heroism, going above and beyond the call of duty, by directly attempting to rescue one or more persons involved in a water related incident. It is open to Law Enforcement, Boating Safety Volunteers, and other marine partners only.”

On July 16, 2019, Deputy Dennis Greiner was involved as a student in the white water jet boat training class with OSMB. This class was being conducted on the Rogue River in Curry County. Deputy Greiner was the operator of the jet boat training platform he and his instructor, Sergeant Nathan Thompson, were on. They were in the area of the Rogue River known as Lobster Creek when he and his instructor noticed a young girl in distress at the water’s edge. The young girl was out in the mouth of the creek and was starting to go underwater when Deputy Greiner operated the patrol boat to her location. The young girl was removed from the water and it was believed had Deputy Greiner not piloted the craft to her and both Deputy Greiner and Sergeant Thompson removing her from the water the young girl would have drowned. Two unsuccessful attempts were made by bystanders to rescue the girl prior to Deputy Greiner and Sergeant Thompson’s arrival.
Our thanks goes out to Deputy Dennis Greiner for his quick actions and his representation of the men and women of the Tillamook County Sheriff’s Office, along with Sergeant Thompson for coming to the aid of someone in dire need. Sheriff Horton added that he was not only proud of Dennis, but commented that he demonstrated through actions the character of the Tillamook County Sheriffs Office. 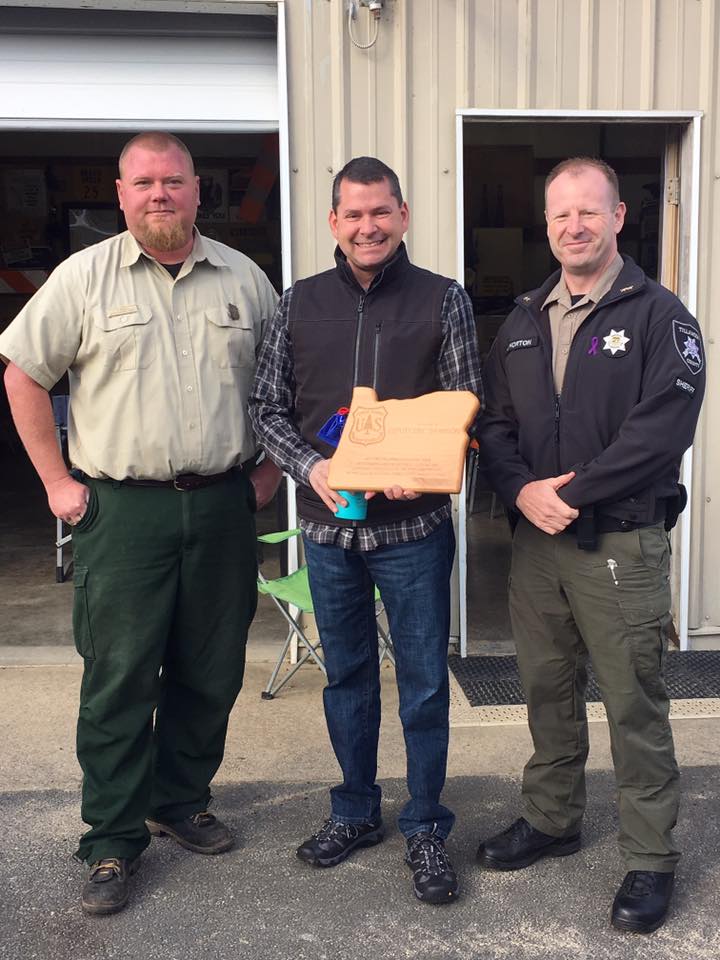 On Saturday October 26th at 11:30 am at the Sand Shed of Sandlake Recreation Area the United States Forest Service Hebo Ranger Station hosted a BBQ honoring Deputy Eric Swanson for the time he committed in assisting United States Forest Service during his employment with the Tillamook County Sheriffs Office. He was presented a plaque by USFS Hebo Ranger Station. Deputy Swanson routinely filled in to assist in our partnership with the USFS contract. Deputy Swanson’s time was spent assisting current and past full time Sand Lake deputies. The Sandlake Deputy contract position between USFS and Tillamook County Sheriff’s Office is currently our longest standing contracted position dating back several decades.
Deputy Swanson was thanked by USFS LEO Felicia Sloan for assisting in her training, including geography, and meeting several community partners. LEO Sloan presented him with a USFS challenge coin.
Deputy Swanson was wished luck in his new position at Tillamook Regional Medical Center.
Eric also told us, he was planning on purchasing an ATV so he could come to Sandlake and harass Deputy Christopherson, the current Sandlake contract deputy. Game on Eric, game on…