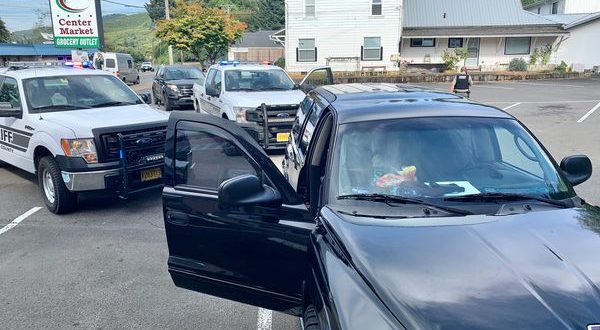 September 2, 2021 – 1:15 pm
Last week, we told the tale of some fine people that decided to ruin other people’s vacation to Tillamook County by breaking into their rental car and stealing passports, computers, medicine and other important items ….. here is the rest of the story:
“Last Wednesday, August 25th, visitors from Florida and New York, were victims of a car break-in and theft while parked at a Rockaway Beach trail head,” said Detective Sgt. Michelle Brewer, who was working TCSO’s Rockaway Beach Patrol at the time of the call. “A backpack, containing a laptop and other personal items, was taken from the vehicle after a window was broken.”

Luckily, surveillance video of the incident was available which showed the two male suspects committing the crime and identified their vehicle. Sgt. Brewer issued a BOLO (Be On the Look Out) for the suspects and their vehicle – which was very distinctive and noticeable. Photos were shared with TCSO Deputies and police officers throughout Tillamook County and a coastal wide law enforcement alert was issued.
“Deputy Ben Berger spotted the vehicle in Cloverdale later in the afternoon and stopped the vehicle. Several, but not all items, were recovered including the victims’ laptop, medication, passport and vaccination card. The items were returned to the theft victims just before they had to catch a flight back to the east coast,” said Sgt. Brewer. 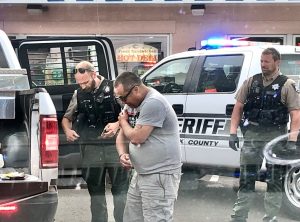 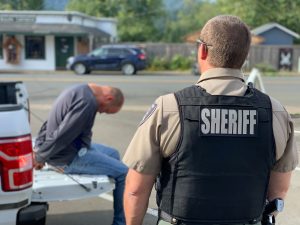 In addition to the two suspects, an adult female and three children were in the suspect vehicle at the time. TCSO Deputy Chris Barnett assisted Deputy Berger with interviewing the suspects and searching their vehicle. Additional suspected stolen items were located and seized from the vehicle. These items were later linked to a burglary and thefts out of Washington State after an investigator in Chehalis, Washington, saw TCSO’s original Facebook post. William P. Pelkey, 41, transient, and Stewart Scott Berglund, 56, of Tacoma, were cited in lieu of arrest for Unlawful Entry of a Motor Vehicle, Theft 2 and Criminal Mischief 2. Due to restrictions beyond TCSO’s control, Pelkey and Berglund were not able to be lodged in our jail.
However, it is believed that Pelkey and Berglund committed felonies in the Washington cases and arrest warrants should be issued for their arrest by those jurisdictions.