By Brian Cameron, Tillamook Fire District Vice Chair
Tillamook Fire District wishes to address some recent issues that have been an ongoing focus of attention within the community, with the ultimate aim being to explain a number of events that the community has expressed desire to learn more about.
Nearly one year ago, tragedy struck the District with the unexpected retirement of former Chief Rick Adams. Due to the nature of his exodus with the District we are unable to discuss any of the details regarding that incident. However, his retirement did spur a number of additional issues that were happening unbeknownst to the District Board of Directors.

Criticism was brought to the Board’s attention regarding a number of problems that had been happening over the course of years, these criticisms were highly personal in nature and dealt directly with personnel matters with district employees as well as volunteers.
As a Board, it was decided that these criticisms deserved an in-depth investigation. A legal firm was hired to facilitate comprehensive interviews, and to ultimately generate a report for the Board. What was found was concerning. However, due to the highly personal nature of the issues at hand, in the report that was generated for the District, it was deemed protected from public records requests, by the author of the report.
While the Board of Directors was busy addressing these very serious issues, allegations, and personnel-related problems, it was brought to the District’s attention that for a number of years there were errors and discrepancies regarding volunteer-stipends that each District volunteer receives for showing up to help with an emergency incident. In addition to the volunteer stipends, it was also brought to the attention of the Board that a number of problems resided within the accurate accrual of the full-time employee’s sick leave, vacation time and comp time.
During the following months, the District worked hard to address these problems as directly as possible without overstepping any sort of legal or procedural restrictions. The District called upon advice from attorneys, accountants, and consultants who were able to better guide the Board through this trying time. After a number of meetings, the process of correction began and over that course the District compensated more than $60,000 of previously missed volunteer stipends as well as made good on missing vacation, sick and comp time for the full-time District employees.
During that time, the District also hired Interim Fire Chief Dale Kamrath, who has graciously aided in a smooth transition to the process of hiring a new fire chief. Kamrath has been presiding over a great majority of these issues that have arisen and his involvement has been of crucial importance to Tillamook Fire District. In the past several months, our former Board Chair, Debbi Reeves, stepped down from her position with the Board, citing the ongoing issues as distasteful to why she originally joined. More recently, another position opened up on the Board of Directors with the abrupt resignation of Eric Swanson, who served a number of years as well. 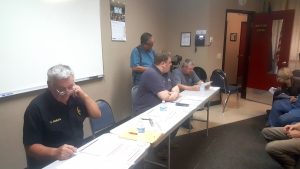 Currently, Tillamook Fire District has appointed Allen Burris to take the vacant position left by Reeves as well as the very recent decision to bring Roy Ellerbroek on to fill the remaining seat left by Swanson. Both have served Tillamook Fire District in various capacities in the past and we are happy to have them on the Board. Director Tim Hamburger has been elected as the new Board chairman with Brian Cameron serving as District vice chairman.
Moving forward, Tillamook Fire District hopes to quickly repair much of the issues that have been going on for nearly a year. To do so, there needs to be more investigation into whether or not there has been other discrepancies or errors that were otherwise overlooked. It has been decided to have a separate, third-party accountant take a comprehensive look into the financial records in order to see if anything has gone unseen. If new issues arise because of this process, the District will do what’s necessary to remedy what is found in the best way possible.
Tillamook Fire District wishes to thank every single one of its full-time employees, the many volunteers – and their families – that make what we do possible, as well as the concerned citizens that have shown up to our regularly scheduled meetings. Without your service, help and input, the District would not be the functioning force it is today.
We hope the issues that have arisen during the past year behind us soon as we begin to facilitate the other long-term needs that ultimately serve the citizens within Tillamook Fire District.