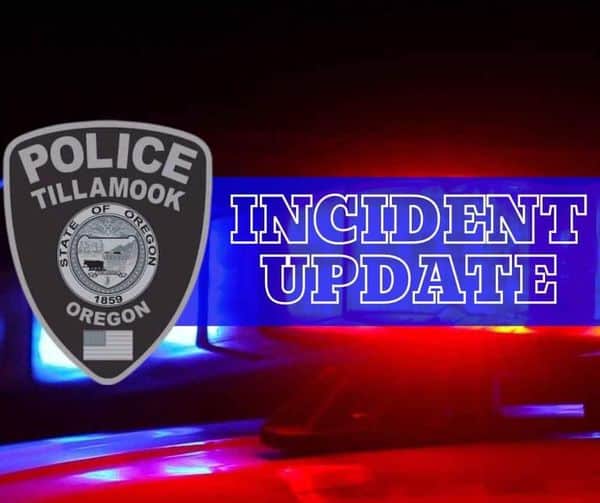 Early this morning December 17th at 5:55 am, the Tillamook Police Department announced on social media that they were currently holding a perimeter around the 800 block of 4th St. At that time, they were actively searchingl, with the assistance of a Lincoln City Police Department K9, for a reported armed suspect who stole a car in Garibaldi.
They activated reverse 911, and asked that community members shelter in place and secure your doors and windows and report any suspicious activity to 911. Chief Rau aassured the community that their safety and security is the highest priority.

At 7:28 am, Tillamook Police reported that they had stopped the search as the K9 tracked the suspect north from the hospital into a wooded area and deep water. At this time, after reviewing the initial call and obtaining more information, the Tillamook Police Department do not have any information to confirm that the suspect was actually armed, and do not believe our community is in danger at this time.
The Tillamook County Sheriffs Office is continuing their investigation of a reported burglary that initiated this pursuit from Garbaldi.
One Tillamook Police Officer suffered numerous lacerations when he put himself in harms way to push the suspect’s vehicle to a stop as he was recklessly driving through our little town and putting innocent people at risk. The officer was treated by medical staff and is at home recovering.
“We are thankful for the relationships we have with our partner agencies in the Tillamook County Sheriffs Office, the Oregon State Police and the Lincoln City Police Department who responded to help us and most importantly for our 911 Dispatch Center for their tireless efforts to make sure we had every available resource to help,” stated Chief Rau. “We appreciate all of your support, we take our responsibility to keep all of you safe to heart.”
The investigation is continuing, the reported weapon was possibly a BB gun or fake gun, and a potential suspect has been identified, but has not been located. The community is reminded to secure their homes and vehicles. There have been numerous stolen vehicles over the last week as well.