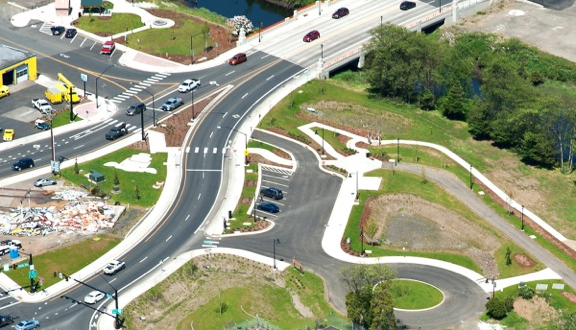 Tillamook, Oregon, May 24, 2019 –The dramatic makeover for the Tillamook town center that resulted from the Oregon Department of Transportation (ODOT) highway project has given the community a strikingly fresh and vibrant image and now that the US101/OR6 Intersection project tear-up, construction, and traffic delays are over, the City of Tillamook and its business community are preparing to take back the town for a full force summer season of renewed vitality.

The opening up of the vista around the intersection so that the Hoquarton area near the new four-lane bridge now serves as a focal entry point for the community. The elimination of the web of overhead wires and the enhancement of city parks on both sides of the bridge have accented the streetscape work and, this last month, the centerpiece of the entire intersection, where the former Shell Station once stood, was leveled, opening up an even greater opportunity to fashion a bold statement about the community of Tillamook.


As such, the City Council of Tillamook is hosting a workshop on June 3rd at 5:30 in the Stan Sheldon Meeting Room at the Tillamook County Emergency Communications District, 2311 3rd Street, to brainstorm on concepts about what should happen with that centerpiece. Ideas have already starting flowing in and will be welcome up through that evening.
Following up on the success of the Waterfront Walk at the beginning of May, the Chamber is organizing and promoting a parade of events to keep the heart of the City pounding. Starting with the Cork & Brew Tour on June 14th and followed immediately by the kickoff of the Tillamook Farmers Market on June 15th which goes on weekly every Saturday until September 28th.
The event parade continues with the Chamber organizing the 62nd annual June Dairy Parade to take place on June 22nd right after the YMCA’s annual Milk Run. Staying in step, there are monthly events rolling out all summer, such as the downtown Sip & Shop on the 3rd Fridays, Art Accelerated’s Art Walk on the 2nd Saturdays, and the City’s movie nights on June 28th, July 26th, and August 23rd. All this followed close on their heels by the fall and winter events such as Small Business Saturday and the Downtown Sweepstakes.
As a complement to the events, the City is initiating several new downtown enhancement programs. In coordination with the Tillamook Revitalization Association (TRA), a banner program for the new decorative light poles in the Town Center is being developing that will include seasonal and event-based banners, along with the flower baskets. There may be opportunities for sponsorship pennants as well. As part of that program, the TRA will also be managing a large overhead event banner location spanning southbound 101 by Sue H Elmore Park as a way to further promote community events.
In order for that program to shine, no other banners, pennants, or streamers will be allowed in the right-of-way, other than the Tillamook Rotary Club’s program placing national flags several times a year in the new sidewalk sleeves that the highway project provided. Program details can be found on the City’s website at www.tillamookor.gov or by contacting the Tillamook Rotary Club at rotarytillamook@gmail.com.
If downtown businesses feel the need for additional exposure, they do have the option to get one free sandwich-board annual sign permit for in front of their store. In order to keep the City’s sidewalks attractive, uncluttered, and safe, any temporary merchandise display, outdoor seating, or additional signage in the right-of-way is subject to securing a Right-of-way permit. Additionally, sales event/Grand Opening signs are limited to four weeks per year and must be removed thereafter.
While all of these regulations have been in place for a long time, the City relaxed enforcement during the construction period in order to assist the community’s businesses through a difficult period, but now that that gauntlet has been run and a new streetscape vision has been realized, the enforcement will be reactivated starting in June.
The same has been true of parking in Tillamook; while the construction project was underway, the City held back on parking enforcement and tested a new Parking Program that provides for both downtown customers and employees. This is also now ready for implementation and information on where those various parking areas are located can be obtained from the Chamber and the City Offices.
To further dress up the downtown, there are enhancement and financial incentive programs such as the Chamber’s Downtown Planter program and the Tillamook Urban Renewal Agency’s Front Porch Initiative which has provided façade improvement funding to help dress up appearances to multiple businesses.
Last, but not least, a new ‘Find the Cow’ scavenger hunt was laid into the sidewalks as part of the ODOT project for the purpose of enticing visitors and community members to walk about and explore the town. The City and Tillamook Chamber of Commerce are working on brochures and mapping for these specially-designed paver stones, along with an award program for those who find and document the location of the all of the paver stones. Businesses may also want to tie in promotions related to the paver near them.
For more information, go to www.tillamookor.gov