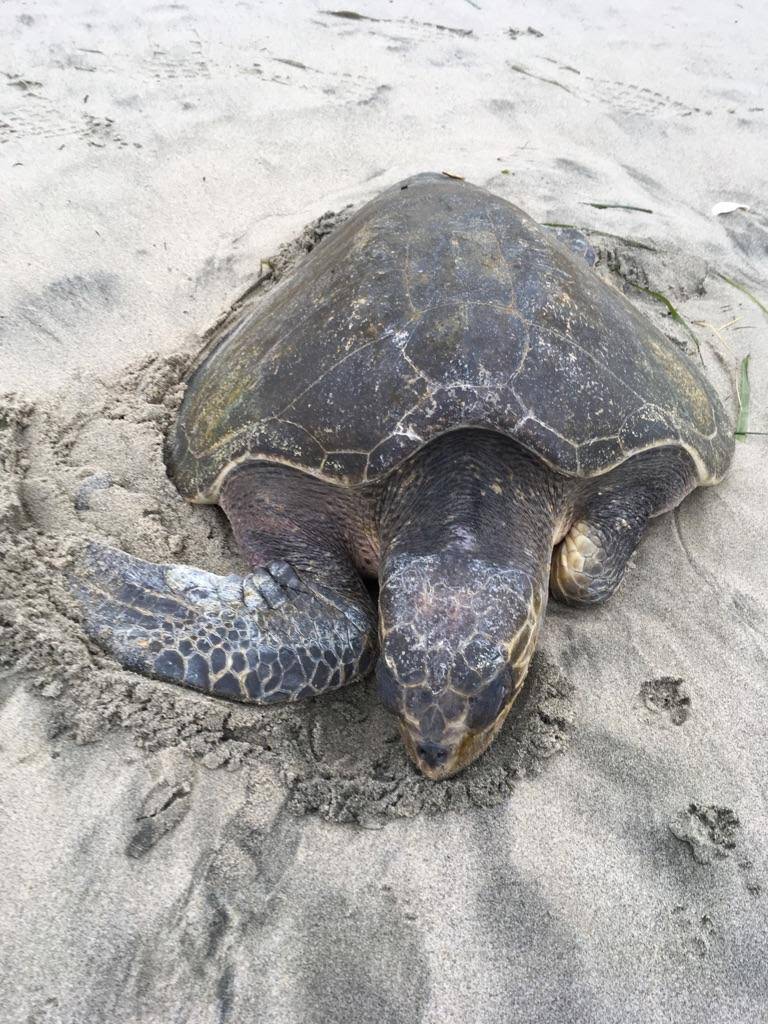 By Laura Swanson, Editor, Tillamook County Pioneer
It’s 9 am on January 24th, Don Best, well-known local photographer glances out from his Rockaway beachfront property and notices lots of stuff on the beach, and heads out for a quick walk. A large crab tote catches his attention, and then nearby he notices somethinge else — a turtle.

His text to the Pioneer …

“Things on the beach this morning. A dead turtle too,” texted from Don Best. “Oh, it’s still alive! Look at the flipper marks in the sand.” About this time, the turtle opened it’s eye as well. The Pioneer quickly sent Don the phone number for Seaside Aquarium (503-738-6211) and a rescue team was dispatched to Rockaway Beach.
Aquarium manager Keith Chandler and his team arrived about 60 minutes later. Tiffany Boothe with the Seaside Aquarium identified the turtle as a male Olive Ridley, the same species that have washed ashore on southern Oregon beaches.
Chandler and a helper used the washed ashore crab tote to provide extra protection for the turtle as they loaded it into the back of a pickup.

The rescue team had just arrived back in Seaside, and the Pioneer will have an update about the turtle’s condition and impending transport as soon as it is available.
Beach walkers are reminded that there have been several turtle strandings, and when you find one in Tillamook County to contact Seaside Aquarium at 503-738-6211 or the Oregon Coast Aquarium at 541-867-3474. The Oregon Coast Aquarium is the only rehabilitation facility in Oregon authorized to rehabilitate sea turtles.
Partnerships with other organizations, like the U.S. Fish and Wildlife Service, Oregon State Police, Seattle Aquarium and SeaWorld, is essential to the successful rehabilitation and release of these endangered species.
Sea turtles are not found on Oregon or Washington beaches unless stranded. The Aquarium typically sees these extremely sick turtles in the winter, possibly due to the cold water temperatures, changing currents, and high frequency of harsh storms that wash the hypothermic turtles ashore. If you find a sea turtle on the beach, immediately note its location, remain nearby to observe it, and contact the Oregon State Police Tipline at 800-452-7888 or the Marine Mammal Stranding Network in Oregon, Washington, and California at 1-866-767-6114.