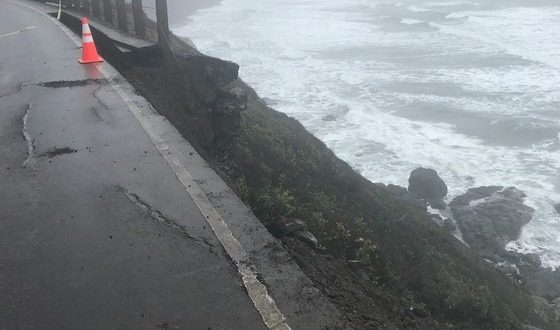 YACHATS – A section of U.S. 101 will close completely for up to a week to build a retaining wall to shore up a shifting portion of the road at milepost 170.5, 2.5 miles south of Cape Perpetua. The closure will be between Sea Lion Caves and Cooks Cavern, areas that have space for larger vehicles to turn around, between Yachats and Florence. Local traffic will have access beyond the closures on either side of the project, but there will be no through traffic at any time.

The closure will begin later this week, depending on the weather. Until the closure begins, traffic will continue in one lane, controlled by flaggers. Travelers should expect closures or extended delays in the area for the next few weeks. Check TripCheck.com or call 5-1-1 for the current road status.

A project to repair the section of road held in place by a historic retaining wall began last Monday, February 6. On Friday, the northern half of the wall collapsed and an employee of GeoStabilization International and the drill rig he was operating fell about 150 feet to the rocks below. The person is recovering from injuries sustained in the accident.

Road status information boards will be placed on U.S. 101 at Newport, Waldport and Florence, and on OR 126 Florence-Eugene Highway in Florence and Veneta.

While the road is completely closed, crews will be building a new retaining wall to hold the road in place. After the closure there will be access through the project area on a single lane with flaggers controlling traffic, but travelers should expected extended delays for an additional week. Once the repair project is complete, the road will again be closed for several days for the drill rig to be recovered from the rocks below. A 200 ton crane will be used and will block the entire road.

A crack in the road was reported in January. Monitoring found that it was becoming larger because the containment wall was failing and an immediate repair was required.