On December 29, 2019 at 8:41 pm Tillamook Fire, Tillamook Regional Medical Center Ambulance and the Tillamook Police Department responded to a vehicle/pedestrian accident in front of the Tillamook High School on 12th Street. There had been a school concert which was just finishing with persons leaving.

Investigation determined that a 16-year-old male student was walking across 12th Street, in the crosswalk, assisting his grandmother. They were crossing from the main school building toward the parking lot, when he was hit by an eastbound vehicle. The action of being struck caused the student to be pushed into his grandmother who also fell to the ground. Both the student and grandmother suffered non-life threatening, moderate injuries and were transported to the emergency room by ambulance.
The vehicle that hit them was an older Chevrolet SUV. This vehicle was traveling eastbound on 12th Street. The driver was a 17-year-old high school student with another student passenger. The investigation is continuing. 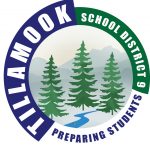 Tillamook School District is very concerned for the safety of the students, staff and families that we serve. Safety is one of our highest priorities. We have been focusing recently on making 12th Street safer for pedestrians and automobiles, both during the school day and in the evenings at school events.
The District is working with the PUD, City of Tillamook and the Police Department. Most recently, PUD upgraded the street lighting. In the planning stages are the addition of flashing lights at crosswalks and the installation of fencing to funnel pedestrians to crosswalks. The District continually works with Nick Troxel, School Resource Officer, around safety, including safe driving guidelines.
The collision that occurred on 12th St. last evening, happened in a crosswalk that was also lit by several automobile headlights. One automobile traveling westbound on 12th Street was stopped allowing pedestrians to cross. Another automobile parked in a parking lot had lights directed at the crosswalk on the pedestrians. Law enforcement did not attribute the crash to poor lighting.
The TSD9 Crisis Response team assembled this morning. A Care Room will be provided today at Tillamook High School and other schools to offer support for staff and students.
The District is in touch with the families involved in the collision and will continue to offer support.

This is the second vehicle/pedestrian accident to occur at Tillamook High School in the last two months.