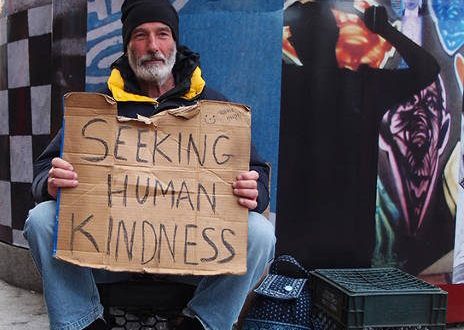 By Christy Kay
“It is easy enough to tell the poor to accept their poverty as God’s will when you yourself have warm clothes and plenty of food and medical care and a roof over your head and no worry about the rent. But if you want them to believe you—try to share some of their poverty and see if you can accept it as God’s will yourself!” –Thomas Merton

Homelessness is epidemic in this country and is often seen as a moral failing of the individual when it is actually a societal failure. Most people don’t know because I don’t often speak about it, but I was homeless at one time. I had to leave a bad situation quickly, and I didn’t have the means to obtain my own place, so I lived out of my car, on friend’s couches, and in a tent for a period, all while I was holding down a job and going to school. If you’ve never been without a home, it is demoralizing. It is stressful, not knowing where you are going to lay your head for the night. It is tiring, not being able to fully relax into sleep because you must keep one eye open for fear of being robbed of all your possessions or being abused and attacked. I was spit on once, as someone walked by me. But this article isn’t about me. I felt called to write about homelessness because, like most cities in the country right now, homeless camps are becoming common locally. As the economy enters a recession, inflation continues, the costs of living are rising while wages remain stagnant, and more and more people are losing housing because of the untenable rent increases and rising mortgage costs — it is going to get worse. Recently, I saw some comments posted on a local community page that broke my heart. Homelessness is a complex issue that won’t be solved overnight, it’s true, but perhaps some accurate information will help open the path to empathy and solutions. I would like to address some common misconceptions and inaccuracies that I have seen in regard to homelessness.

1) There are jobs everywhere. They could get one if they wanted. They are just lazy–
Well, this is not true. Unfortunately, as a homeless person, it is very hard to obtain employment, for many different reasons. Most jobs require that you have a permanent address, and the definition of homeless is not having a place to call home. Without the lack of stability and safety that a home brings, it is hard to find rest and the ability to prepare for a day of work, creating a lack of focus and ability to perform well in a job. Also, most homeless have no reliable contact information like a cell phone or email which are required for employment, but also have a lack of transportation to and from a job. In our own rural area, for example, there is minimal public transportation. And then there is the problem of bathing and hygiene, which is almost impossible when living on the street, or out of your car. Obtaining nice clothing for employment can also be a barrier to obtaining a job. Another factor to consider is that many homeless have gaps in employment make filling out a resume a little more challenging. Many jobs won’t consider hiring someone when there are significant gaps in their employment history or even when they are not currently employed. Sometimes, a criminal history can also be a barrier to obtaining employment. Did you know that being homeless is considered a crime in many cities? Having a criminal record does not look good on a job application, and many jobs won’t hire someone who has one.” Pick yourself up by your bootstraps” is not possible for someone who has made any kind of mistakes in the past that results in any kind of record, even misdemeanors like DUI. Often, the majority of the chronically homeless are older. For many people who are getting older, it is harder for them to do labor work. Finding work outside of labor, especially without the resources mentioned above, is hard. Lastly, there also can be mental or physical disabilities as well as addictions that make it difficult to find a job and keep a job. Depression and mental disability directly impact the ability to find the willpower and determination needed to obtain employment. The cycle of homelessness is not easy to step out of, and near impossible without help.
Now, it must also be mentioned that even if a homeless person were able to get help with all those things, and are able to obtain employment, any minimum wage job will not be enough to cover rent. Even two full time minimum wage jobs will not pay for a studio apartment in any city in the US. This is a problem that exists in every major city on the country, not just our little area. On average, on any given day, 40% of those who are working full time in a minimum wage job, are homeless! These people are not lazy, they are working poor. As rents and home prices continue to rise, this makes having a home even more unattainable.

2) They are all drug addicts who choose to be homeless and should be locked up. Again, this is just not true. As stated previously, 40% of homeless in this country are employed. They are not drug addicts. They just can’t afford rent. The two main aspects found to be the root causes of homelessness are trauma and a profound catastrophic loss of family. For the majority of the chronically homeless this is true. They all have something traumatic that has happened in their life and their families or community are not able to be there for them. Addiction is a chronic brain disease where one is physically and psychologically dependent on drugs, alcohol or a behavior. According to the national Coalition of Homeless, 38% of the homeless abuse alcohol and 26% of the homeless abuse drugs other than alcohol. Despite the stereotype that homeless people are addicts, addiction is a disease that can affect anyone. According to recent statistics 1 in 3 people have had some form of drug addiction at some point in their lives. Add the stress and demoralization of homelessness to an addiction problem, and it is even harder for one to maintain their sobriety. We need to address these root causes of homelessness so that as they find a home, a job and stabilize, they can flourish. And the way to address these roots is through relationship, through being their family, their community. Putting people in jail is not a way to address the need for addiction counseling and help, as well as homelessness caused by addiction.

3) I understand that they are down and out, but they could at least keep their camps clean. I mean come on, it’s disgusting. It’s an eyesore and it hurts my property value as well as the environment. I am not mad at anyone for being down and out! But I don’t care how bad off you are you, don’t need to junk up the area with garbage or sewage.
The garbage and waste created by a homeless camp is a huge problem. Of course, this is true. But I guarantee that they do not want to live like this. Where are they supposed to dispose of their waste? The local dump is many miles outside of town. It is illegal to dump personal trash anywhere. So where should it go? Also, you need access to transportation to even get it to the dump. Then there is the cost of disposable. It is cost prohibitive for even those who are working and have a place to live, so if one can’t afford to be in a home, they most likely can’t afford to pay for disposable of waste.

It is said that a society should be judged by the way they treat the most vulnerable of their population. And as the demonization of the housMeless and the less fortunate among us becomes more and more common, it appears that it is less likely that their will be empathy enough to create and fund programs needed to change the circumstances of, or uplift, those among us who need help. It is a moral obligation for us to do what we can for others. Ignoring a huge problem and crisis is not the answer to solving it, it makes it harder. I am blessed enough that I was able to get help. I had friends and family that lifted me out of a bad situation that was going to get worse. I am blessed with a home of my own right now. But it is becoming harder and harder to pay rent and utilities, feed myself and family, and keep a car running, even with multiple jobs, it doesn’t even cover the costs of living right now. Not to mention there is a mental and physical stress caused from working so many jobs. Burnout and stress complicate this, and like most Americans living paycheck to paycheck, homelessness is just one medical emergency away.

Please, consider the humanity of those who are homeless when you denigrate them. They are your family, your friends, your community. They are you.
Thank you.

If you or someone you know is houseless or struggling to be housed, please contact CARE Inc. at 503-842-5261 or go to www.careinc.org