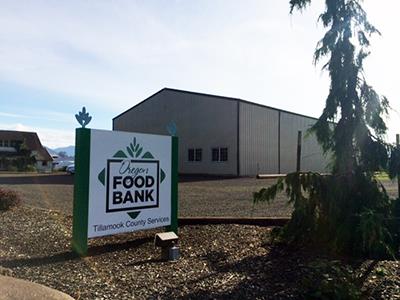 by Mallory Gruben, contributor for the Tillamook County Pioneer

Oregon Food Bank Tillamook County Services leaders say the county’s hunger-relief programs have continued to serve thousands of individuals during the COVID-19 pandemic much like they would in a typical year, despite some new safety rules and increased need.
“Basically how we continued operations was continuing with the original distribution channels we’ve always had, instead of trying to develop one-off programs,” said Melissa “Mis” Carlson-Swanson, Tillamook branch manager for the Oregon Food Bank. “Our goal has been to have as few changes as possible.”
The Tillamook branch of the statewide nonprofit supports an average of 30 programs throughout the county. That includes local food pantries, meal sites and site-specific meal programs, such as those offered at child care centers or schools.
In total, the food bank serves over 3,000 people “either once or multiple times a year,” Carlson-Swanson said. Need for services has increased roughly 40% since the pandemic began, she added.

“At the beginning of the pandemic, we saw the number of households seeking food assistance in some places go up as much as 300% in that first month. I think part of that was driven by the panic caused by run on products. Stores were running out of supplies. It’s an expected reaction by the public,” Carlson-Swanson said. “We’ve settled down to about 40% increase throughout most of the year.”
Volunteers and donors helped to keep as many of the food bank’s partner programs running throughout the pandemic as possible, ensuring a “steady network of sites” to serve people experiencing food insecurity. Carlson-Swanson said just two of the food bank’s partner sites had to close temporarily.
The rest of the sites continue to run as normal, with the exception of a few new rules to follow statewide COVID-19 safety regulations to ensure the safety of the volunteers, staff and households that use the program.
“Everyone is following the guidelines. It looks different for some sites, like there is one pantry that still has limited access to letting people do shopping inside the pantry. But the majority have moved to a model of drive-thru of some sort … and all of the meal sites are doing to-go meals,” Carlson-Swanson said.
The food bank, which serves as the central warehouse for food, started doing contactless deliveries to its partner agencies. The staff and three volunteers that work inside the warehouse wear masks and keep six-feet apart.

Out of “an abundance of caution,” the warehouse is closed to outside volunteers. That means volunteer groups are unable to help on-site like they usually do.

“Because we are essential workers on the front lines in the warehouse, and with having such limited teams, we have to minimize risk as much as possible. Oregon Food Bank has been extremely responsive in a very diligent way to reduce risk as much as possible,” Carlson-Swanson said. “From the beginning of the pandemic, we started social distancing. We started wearing masks as soon as we received them from volunteer mask makers. We haven’t wavered from that. We’ve been at or above the state and/or local level of requirements throughout the pandemic.”

However, there are a few bright spots in the state’s pandemic response. Near the onset of the pandemic in March, the state provided $8 million for direct food purchases to the Oregon Food Bank Statewide Network. Carlson-Swanson said the Tillamook Branch has spent “tens of thousands of dollars” locally at Food Roots and Valley Fresh Produce, and Fred Meyer.
“That money turned immediately into food that we could distribute,” she said. It also invigorated the local economy by keeping those dollars in the county.


The pandemic also highlighted the creativity, compassion and generosity of the food bank’s volunteers and donors, who have worked tirelessly to maintain steady food distribution services throughout the last year, Carlson-Swanson said.
She pointed to the Tillamook YMCA as one example. 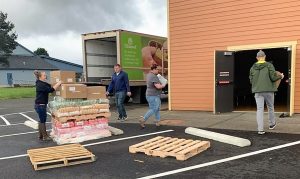 “When the Y ended up first shutting down, they helped us build emergency food boxes. They stored them, and they helped to deliver food to people before we knew what was going to happen,” Carlson-Swanson said.
Recently, the YMCA assisted with the delivery of 100 cases of local canned salmon from the Smiley Brothers Salmon Harvest, unloading the donation to a pallet at the main warehouse.

The food bank also received donations from The Schooner Bar and Grill Thanksgiving Benefit Dinner, Werner Gourmet Meat Snacks, Tillamook Country Smoker, Tillamook Creamery, de Garde Brewing and Valley Fresh Produce, among countless other local organizations. Individual donors sustained their giving, and a number of new supporters started donating, as well.
“I can’t even express the level of gratitude that we have,” Carlson-Swanson said. “Folks are really standing behind the mission of the work we do, and they are going to continue doing the work because they know it’s needed.”

How to donate:
Monetary donations to the Tillamook Branch of the Oregon Food Bank can be sent to P.O. Box 1344 in Tillamook, OR 97141 or online at https://give.oregonfoodbank.org/give/92782/#!/donation/checkout and designate the donation for Tillamook County.