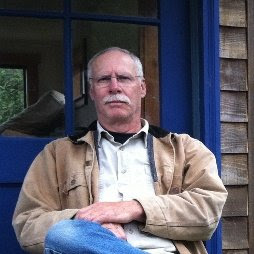 He will then discuss past research in light of the climate crisis and potential opportunities afforded through the much discussed Green New Deal. The opportunities and proposals Chuck will explore center on building up carbon dense forests to mitigate climate change, protect watersheds and provide for rural economic renewal.
Chuck has studied coastal forests and watersheds for twenty-seven years as Director of the Coast Range Association. Over that time he has led studies into the connection of forest management to water quality, salmon habitat, pesticides, and the conservation of biological diversity. Chuck’s career studying coastal forest management has always focused on the underlying economic issues that drive forest management.
Do you remember seeing a color-coded map a few years ago that showed ownership of industrial forests? Published in Hipfish and other north coast publications, it covered the northern portion of the Oregon Coast Range. Compiled by a CRA team, it shows who owns what (the who is mostly corporate investors, the what is the industrial forest lands we see from our highways). The owner of every parcel was identified through a painstaking data gathering process using public records. Ultimately the map demonstrates that our “forests” tend to be tree farms, grown for profit, not habitat or air and water quality.

North Coast Communities for Watershed Protection, previously known as Rockaway Beach Citizens for Watershed Protection, meets the second Tuesday of every month at 6:00 p.m. at NCRD in Nehalem. This is part of the educational “Speak Truth to Power” series of talks.
NCRD is located at 36155 9th Street, Nehalem, one block off Hwy. 101 and up the hill from Nehalem Lumber.
Rockaway Beach Citizens for Watershed Protection started in 2011 when a group of neighbors in Rockaway Beach, Oregon watched as the Jetty Creek watershed, the source of their drinking water, was clearcut logged at an alarming rate and then aerial sprayed with pesticides. In the last decade, about 90% of that watershed has been clearcut, thereby causing highly detrimental effects on the drinking water and natural habitat. We have now grown to represent other communities up and down the North Coast of Oregon that face similar difficulties; therefore, our new name, North Coast Communities for Watershed Protection, reflects our working together on a regional basis to insure that the air we breathe and the water we drink are safe.