Wayne Schroeder will forever have trucking in his blood.

“I wanted to drive truck, Ken [Zwald] heard that I did, but I didn’t have any experience,” Wayne said. “Ken gave me the opportunity to drive. I owe him for letting me have that opportunity. I didn’t think it would be my whole career.”

Wayne was born and raised in south Tillamook County on the “Moon Creek.” He graduated from Nestucca High School in 1972 and was drafted for the Vietnam War. He chose to enlist in the National Guard where he dedicated six years of service.

Ken and Wayne met through mutual friends in the early ‘70s.

In 1979, Ken started Zwald Transport, his own trucking company, as a hay hauler, and then eventually purchased a milk route in 1982.

“In ‘85, Ken got a hold of me to be a relief driver for him on his weekend milk routes,” Wayne remembered.

Wayne agreed to pick up routes here and there while he was still working fulltime at a mechanic shop in Tillamook.

One day Ken called up Wayne.

“It was May ‘87 and [Ken] said, ‘Today’s the day…we want you to come on fulltime,’” Wayne recalled. “I told him two things: If it was going to destroy our friendship, I’ll go home; and the second was that I wanted time off for hunting season.”

“We had one truck, one boss, and one employee,” Wayne said. “We would haul milk in the morning and evening, and haul hay to fill our time.”

The business acquired more and more milk routes until they were running all routes for the Tillamook Creamery, with Wayne sometimes driving 18 hours a day to get all the shifts in.

“Milk hauling was one of the good, steady jobs in Tillamook County. We did it 365 days a year, night and day,” Wayne said. “Milk had to be hauled through the snow and ice; and we did it.”

Through the years, the business grew, adding more trucks and drivers along the way.

Wayne’s route was in south Tillamook County near the Blaine area where he grew up.

“I was offered other routes over the years, but I said, ‘That’s where my roots are, that’s where my connections are,” Wayne said.

During his years on the route, Wayne saw farms change hands through the generations.

“When I first started hauling milk, it was the grandparents and then the kids came in and took it over,” Wayne said.

While trucking has a piece of Wayne’s heart, his wife Irene is his true love.

“Her father was a customer at the mechanic shop and I really bonded with him,” Wayne said. “Irene and I become friends for over 30 years.”

One night, a friend request via Facebook spurred something more than friendship.

“We went on our first date and it never ended,” Wayne said. “We have a strong faith in a higher power that brought us together. It was meant to be”

The two, affectionately known as “Ma and Pa” around Zwald, celebrated their second wedding anniversary this September.

“We have inherited a lot of non-biological kids,” Wayne said. “Heather and Nick are some of the best. It’s been neat to watch them grow and mature.”

Wayne celebrated his 35 years with Zwald this past June, and due to health issues has chosen to retire.

“Ken and I stayed friends; we got through it all,” Wayne said. “I couldn’t ask for better bosses or a better company to work for. They’re like my family. When my life really went down, they stood by me.”

Wayne’s years of experience have created wisdom and advice that other drivers take to heart and will truly be missed around the truckyard.

“Come in with an open mind with the thought of being a good truck driver and not just driving truck,” Wayne said. “Be thankful for every minute of every day you have.” 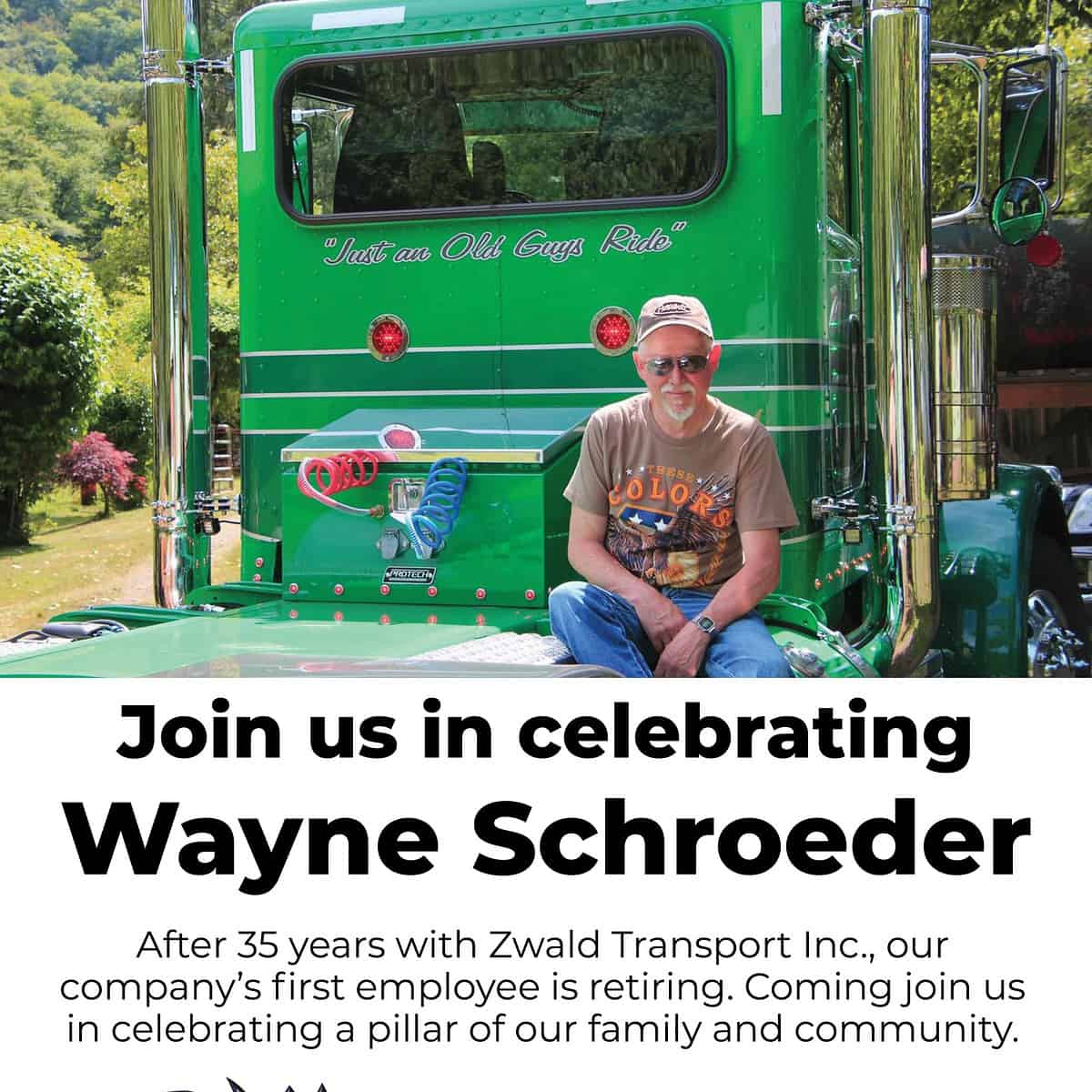